HERITAGE HIGHLIGHTS:   One of the great castles of Wales, the site where Edward I proclaimed his Statue of Wales 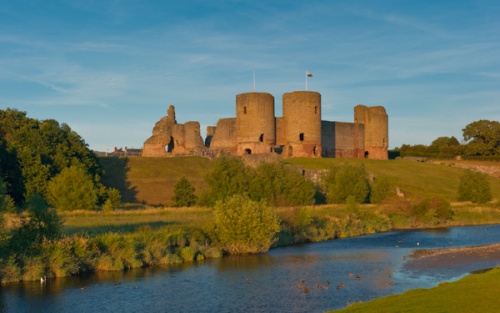 Rhuddlan Castle is famous for being the place where Edward I issued the document in 1284 that set up the government of Wales under his rule. He held a parliament in the town, and a plaque is on the wall of the Old Parliament House commemorating the event.

The historical roots of Rhuddlan extend deep into the Dark Ages. There was a battle here between the native Welsh and a force of English invaders as early as 796 AD. The English built a fortified borough at Rhuddlan in 921 AD, but the Welsh retook it in the mid 11th century.

The first Norman incursion into north Wales took place around 1073 when a motte and bailey castle was erected to guard the lowest bridging point on the River Clwyd, with a new borough beside it. The Norman castle was captured by the Welsh in 1150, and the Welsh held it, with two brief interludes of English occupation, until 1277. That is when things really got interesting for Rhuddlan.

In August of that year, Edward I pushed westward in his attempt to subdue Llewelyn ap Gruffudd. Edward saw the strategic importance of the Rhuddlan site and set his engineers to work to create a new stone castle and a fortified borough. Not only did Edward's men prepare the castle site, but they deepened the River Clwyd so that ships could sail right up to a harbour beside the castle. 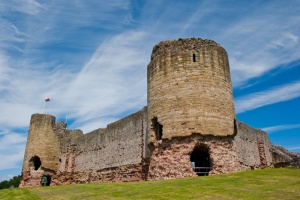 In 1278 Master James of St George, Edward's new master mason and chief castle engineer, came to Rhuddlan to undertake his first commission for Edward; the first of many.

Enough of the new castle was complete by 1282 that it withstood a fierce attack by the Welsh, and Edward made Rhuddlan his headquarters for his war against the Welsh insurgents.

After the revolt subsided, Edward proclaimed his new Statue of Wales at Rhuddlan. The document effectively placed Wales under the direct control of the English crown, and remained the blueprint for English domination of Wales for the next two and half centuries.

Edward also put 1000 marks towards the cost of moving the diocesan cathedral of St Asaph to his new borough at Rhuddlan.

Flintshire itself was a royal estate, with the administrative centre in Chester. The castle repulsed attacks by Owain Glyndwr in 1400 and again in 1405.

The castle was garrisoned by royalist troops in the Civil War, but after Parliament successfully besieged Rhuddlan the castle was slighted to make sure it could not be held for the king again. Much of the building stone from the castle was used by burgesses of the borough for their own building projects.

Enough remains of Edward's imposing medieval fortress, however, to make a visit to Rhuddlan enormously rewarding. The inner ward, in particular, is well preserved, with a pair of impressive towered entrances each rising to four storeys. 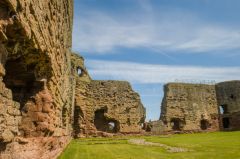 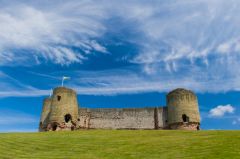 More self catering near Rhuddlan Castle >>