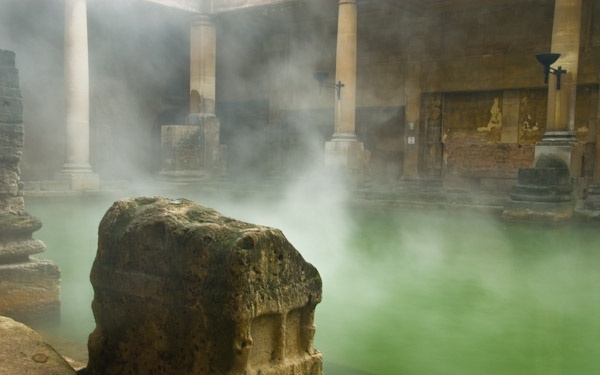 Overview:
Bath combines a wealth of Roman remains with elegant Georgian architecture to create one of the most historically interesting of Britain towns. The historic core of the town is a mixture of broad, tree-lined streets and narrow, pedestrianised lanes.

Bath is one of the major tourist destinations in England, but thankfully it is less crowded than London, and its attractions are concentrated in an area easily walked in a day of sightseeing. Bus transportation in the city is good. Leave your car in one of the perimeter car parks and use the inexpensive "Park and Ride" buses. 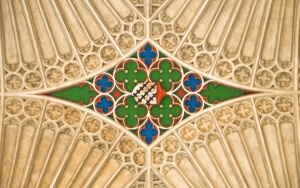 Legend has it that Bath was founded in 860BC by Prince Bladud, father of the King Lear made famous by Shakespeare. Bladud caught leprosy and was expelled from the royal court, whereupon he became a simple swineherd, caring for a herd of pigs.

The pigs were also afflicted with a skin disease, but they were cured by rolling in a pool of warm mud. Bladud followed them into the pool, and he, too, found his disease eventually disappeared. Bladud returned to court and eventually became king, and one of his first acts when he took the throne was to found a settlement at the site of the healing pools. This settlement became the town of Bath.

Whether you believe the Bladud tale or not, it seems clear that the healing qualities of the mineral springs at Bath were recognised before the Roman invasion of 43AD. It was the Romans, however, who were really responsible for the growth of the settlement at Bath. Shortly after the invasion, the Romans built a temple here, devoted to Sulis Minerva. The dedication combined the existing Roman deity of healing, Minerva, with Sul, a Celtic god.

By combining the two gods into one, the Romans followed an established practice in their conquered territories, essentially Romanising existing beliefs in the conquered population. The Roman settlement that was established around the temple was known as Aquea Sulis, or the Waters of Sul.

The settlement at Aquae Sulis continued to flourish until the Roman legions were withdrawn in the late 5th century, after which the site gradually fell into disrepair and was eventually deserted. 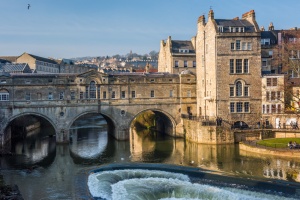 Very little is known about Bath between the departure of the Romans and the Norman Conquest, but we do know that the Anglo-Saxons founded an abbey here before the 10th century. In 973AD the abbey was the setting for the coronation of Edgar as the first king of all England.

A plaque on the exterior wall of the abbey commemorates the ceremony, presided over by Dunstan, Archbishop of Canterbury. The ceremony for Edgar's coronation is essentially the same ceremony still used for coronations today.

By the end of the 15th century, the abbey was in very poor repair. It was saved when Oliver King, Bishop of Bath and Wells, had a dream which urged him to rebuild the earlier church. This he did in grand style, and even though it was damaged during the Reformation, Bath Abbey today stands as one of the finest examples of late medieval Gothic architecture in Britain, with ornate fan vaulting and exquisite window tracery.

Interestingly, it was not the rediscovery of the Roman baths that led to Bath becoming a fashionable spa town. That was to come long before the Roman site was unearthed, for even though the Roman baths were lost, the mineral springs were well known and their healing qualities appreciated. It took the visit of a queen to really launch Bath as a fashionable spa town though. The queen was Anne of Denmark, wife of James I of England, who came in hope of curing dropsy. 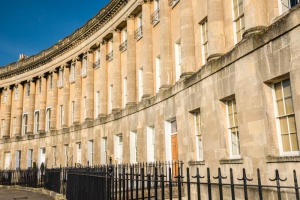 Other royals followed, but as the royals and their entourages came, so did less desirable elements of society, and Bath became known as a hangout for gamblers, thieves, pickpockets, and a plethora of quack doctors who were only too willing to prey on the hopeful socialites who came in search of improved health.

The upturn in Bath's fortunes can be laid at the door of one man; John 'Beau' Nash. Nash, a Welshman, came to Bath in the mid-18th century and established himself as Master of Ceremonies, ruling his unofficial realm from the Pump Room, the hub of Bath's social activities. Under Nash's direction, Bath became famous as a centre for fashion, decorum, taste, and elegance.

That elegance was emphasized by the transformation of the town centre from its medieval roots into a place of graceful, curving Palladian terraces built of warm-toned local stone. Two men were primarily responsible for creating Bath's lovely Georgian face; John Wood the Elder and John Wood the Younger. Beginning in 1729 the elder Wood began his work at Queens Square, but his masterpiece is the Circus, begun in 1754, a year before his death. 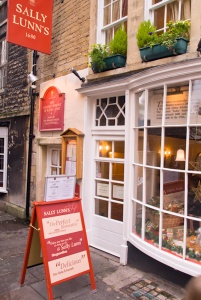 The Circus almost defines Georgian Bath; its circumference is divided into three parts, each composed of 11 terraced houses, decorated by a mixture of classical columns and decorated with a continuous frieze celebrating the arts and sciences.

The elder Wood was followed by his son, also named John, who was responsible for the other grand monument to Georgian architecture; the Royal Crescent. Wood began the Assembly Rooms in 1769, just a year before Robert Adam designed the Pulteney Bridge in honour of William Pulteney, the 1st Earl of Bath. The bridge was inspired by the Pontevecchio in Rome and has narrow shops built onto both sides.

In 1727 some workmen were digging a sewer at the western end of Stall Street when they unearthed something unexpected; a gilded head of Minerva, cast from bronze. Even then, the baths laid hidden for decades. There were further Roman finds in the 1750s, but it was not until the final years of the 18th century that the original Roman bath complex was unearthed.

At the centre of the complex is the Great Bath, still protected by its original lead lining, and fed by underground springs. These springs, whose source is unknown, keep the water at a constant temperature of 49C (about 120F). Attached to the Roman baths is a museum with finds from the site, including the head of Minerva and a carved gorgon's head that used to decorate the entrance to the temple.

As mentioned above, the historic centre of Bath is contained within a fairly small area. It should easily be possible to take in most of the major attractions in a relaxed day strolling about. 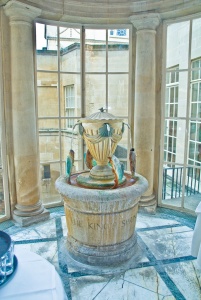 Assembly Rooms
Bennett Street, the beloved setting of Georgette Heyer's Regency romance novels. Built by John Wood the Younger, the elegant rooms now house the thoroughly enjoyable Museum of Costume, which traces the history of fashion through wonderful period displays and over 1000 accessories and jewellery from Tudor times to the present.

Pump Room
Stall Street, overlooks the Roman baths. Drink hot spa water (if you can stomach the rather foul-tasting mixture), or take tea to the accompaniment of a string trio.

Bath Abbey
One of the last major churches built in England before the Dissolution of the Monasteries, and one of the prime examples of extravagant late Gothic architecture. The Abbey boasts wonderful fan vaulting.

Roman Baths
Stall Street. Marvellous museum and the ancient Roman baths that gave this city its name. A World Heritage Site, and well worth a visit. Editor's soapbox: Sure it gets a kazillion visitors every year, and it can be crammed, but it really is a terrific place to go.

Bath Postal Museum
27 Northgate Street, the museum's new location. Traces the history of postal service, including a recreation of a 19th-century post office.

Jane Austen Centre
Much of our perception of what high society was like during Bath's heyday comes from the novels of Jane Austen, whose writing drew a vivid picture of daily life in the early 19th-century spa. This museum on Gay Street traces the career of one of Britain's most famous and influential novelists and her connection with Bath.

Holburne Museum of Art
Great Pulteney Street. The 18th-century historic house just off the east end of Pulteney Bridge hosts a wonderful collection of silver, porcelain, bronzes, miniatures, glass, furniture, and Old Master paintings. There are several Gainsborough originals and a varied program of modern art and crafts. Editor's Soapbox: The Holborn is sadly neglected by most visitors to Bath - don't be one of them. It is a thoroughly enjoyable museum and deserves wider recognition.

No. 1 Royal Crescent
1 Royal Crescent. Part of John Wood's masterwork, the Royal Crescent, this 18th-century townhouse is now a World Heritage Building. It has been restored to what it might have looked like at the time of its opening. You'll be surprised by how small the quarters look for high society living.

William Herschel Museum
Astronomer William Herschel lived in this simple Georgian townhouse, and it was here, in 1781, that he discovered the planet Uranus. The house is now a fascinating museum dedicated to Herschel's life and work.

Beckford's Tower
A striking neo-classical monument designed for William Beckford from 1824, to punctuate a long avenue running from his house on Lansdown Hill. You can climb to the top of the tower for superb views over Bath. 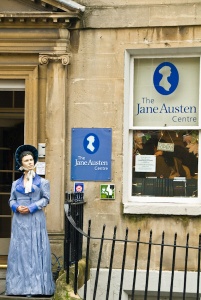 Sally Lunn's House
4 North Parade Passage. The oldest house in Bath. Delve into the basement to see remains of Roman, Saxon, and Medieval building. It was in this house in 1680 that Sally Lunn invented the bun that still bears her name. The upstairs is a tea room and restaurant serving ... Sally Lunn buns (what else?) among other period dishes. We loved visiting Sally Lunn's and exploring the historic cellars!

Other places we enjoyed:

Victoria Art Gallery
Pulteney Bridge. The city art gallery, housing over 600 oil paintings and 5000 watercolours, prints, and drawings. There are collections of glass, watches, and porcelain. A special exhibition gallery houses touring exhibitions and a smaller gallery displays works by local artists. Editor's soapbox: this is a superb gallery to visit. The art is very attractively displayed, and a joy to view.

Georgian Garden
The Circus. The Georgian Garden is a small, elegant recreation of a 1770s townhouse garden. Excavations showed the original layout of the garden, which has been faithfully followed, and it has been planted with species known to have been popular at that period. Free Admission.

Bath Boating Station
Forester Road. An actual Victorian boating station, not a replica. The museum has a collection of traditional wooden skiffs. You can hire canoes or a punt. Don't worry if you haven't punted before, they'll teach you how. (Editor's note: it is harder than it looks!)

Pulteney Bridge
This marvellous reminder of a bygone age crosses the Avon above a shallow weir. The sides of the bridge are lined with shops that look out over the water.

More self catering near Bath

More bed and breakfasts near Bath