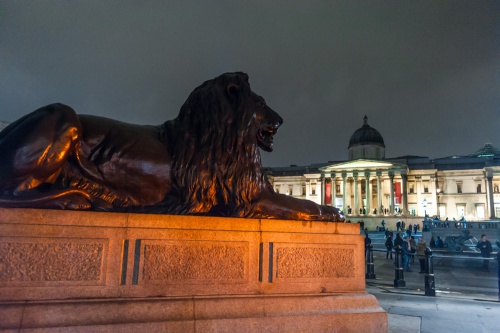 The National Gallery at night

In 1824 the British government purchased a collection of 38 paintings from the estate of a wealthy insurance broker named John Julius Angerstein, paying £57,000 for the collection. From this small start, one of the world's great collections of fine art was born.

Just two years later the painter Sir George Beaumont offered his collection of art to the nation on the condition that a suitable venue could be found for their display. The Beaumont and Angerstein collections were put on display together in Angerstein's former townhouse at 100 Pall Mall.

The quarters were much too cramped to adequately display the artwork, but in 1838 a new building in neo-classical style was built on the north side of Trafalgar Square, on the site of the King's Mews.

The design was by William Wilkins, who incorporated bits of the older Mews in his new building. It is possible that the columns on the east and west porticos came from nearby Carlton House, which was pulled down in 1828. The Royal Academy of the Arts shared the Trafalgar Square space until 1869 when it moved to a new building in Piccadilly. 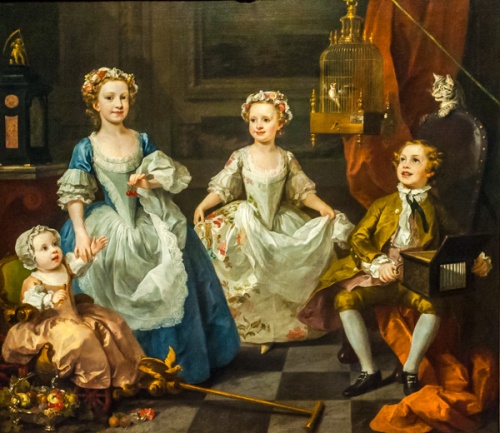 The Graham Children, by Willliam Hogarth, 1742

Though the facade of Wilkins' building is relatively intact, the rest of the Gallery structure has been altered numerous times over time as the art collections grew larger and more space was needed. The present Galley covers over 46,000 square metres - about the size of 6 football pitches.

The location in Trafalgar Square was an interesting choice; it was considered easy to access on foot by lower classes from London's East End, and by the wealthier classes arriving by carriage from the west. The Gallery's mission was to make art free and accessible to all, and not become a venue purely for the privileged classes.

Yet for all those noble motives, the Gallery had no official acquisition policy; works of art were purchased solely on the personal interests of the Trustees. This practice changed from 1855, and the Gallery started an ambitious campaign to collect early Italian art. Then in 1871 they bought 77 works, mainly Dutch and Flemish, from the estate of Sir Robert Peel, the late Prime Minister.

The real windfall came when JMW Turner left over 1000 of his watercolours, sketches, and paintings to the Gallery. The collection was so large that at first it had to be put on display elsewhere until space could be created at the Gallery!

This temporary measure to display British art away from the Trafalgar Square site led to the eventual creation of the Tate Gallery in Millbank as a separate venue solely for British artwork. Though there are numerous examples of British paintings at the National Gallery, including works by Turner, Constable, Gainsborough, and more, many of the finest works of British art are now on display at the Tate and the National Portrait Gallery. 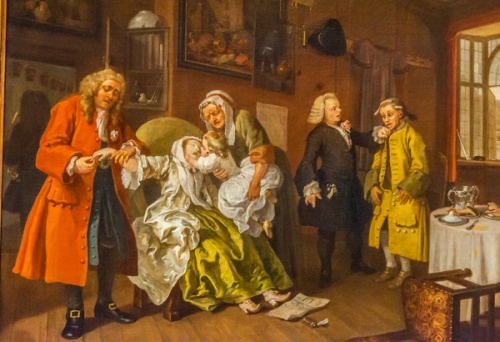 There are approximately 2300 works of art on display at the National Gallery, plus regular touring exhibits of art from other major galleries around the world. The collections are organised by time period, into 4 large groupings; the 13th-15th century collections are on the second floor, while galleries of 16th century, 17th century, and 18th to early 20th-century art are on the first floor.

There are extremely good maps of the galleries available, so you can opt to go straight to the time period you are interested in, or simply browse at your leisure.

With so many wonderful paintings on display, it is hard to choose what to see. Here are a few of the most famous items in the collection, and a few that caught our eye on our last visit. 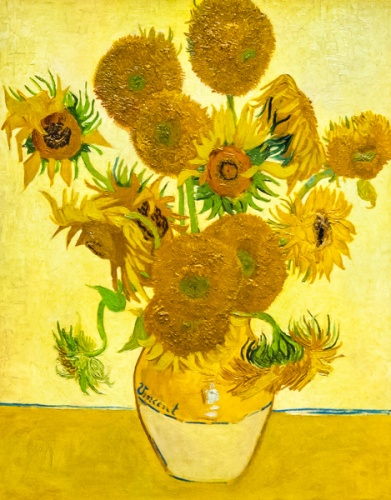 One of the most popular early Italian works is the Arnolfini Portrait by Jan van Eyck. Painted in 1434, it shows the wealthy merchant Giovanni di Nicolao Arnolfini and his wife holding hands. Then there is Rembrandt's famous self-portrait, painted when the artist was 34, in 1640. And we can't mention famous artists without Leonardo da Vinci; look for The Virgin of the Rocks, painted about 1508.

As for British artists, there are plenty to choose from; the one that really caught my eye was JMW Turner's The Fighting Temeraire, painted in 1839. The Temeraire played a vital role in Nelson's victory at Trafalgar, and the painting poignantly shows the moment the ship being towed the Rotherhithe to be scuttled in 1838. And on the subject of British art, look for William Hogarth's entire series of 6 paintings illustrating Marriage a la Mode, a biting piece of social satire.

Perhaps the most famous single painting in the National Gallery collection is Vincent van Gogh's Sunflowers, painted in 1888 as part of a series of 4 intended to decorate the room of fellow artist Paul Gaugin at Arles.

If van Gogh's masterpiece is the sort of Impressionist art you enjoy, you're in for a treat, as the Gallery has a superb collection of works by van Gogh and other Impressionist artists, including Seurat, Gaugin, Cezanne, and Claude Monet. Look for Monet's Water Lilies, and studies of the Japanese Bridge in his gardens. 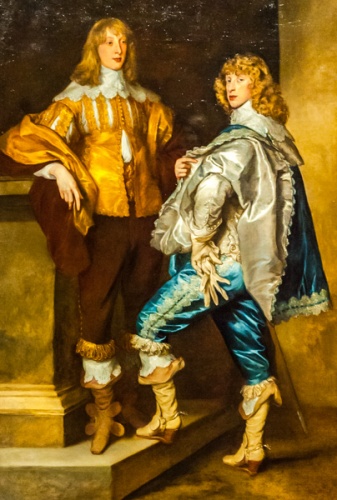 There are regular special exhibits, lectures, and learning opportunities for delving deeper into particular artists and time periods.

Access to the Gallery is free, though there may be a charge for special exhibits. The Gallery is easy to reach, at the north side of Trafalgar Square, just a few minutes walk from Charing Cross station. After you've explored the Gallery to your heart's content, don't forget the National Portrait Gallery, just around the corner. 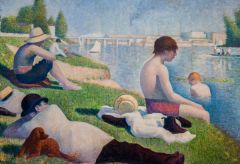 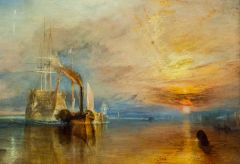 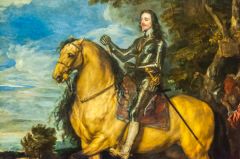 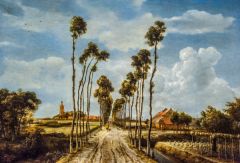 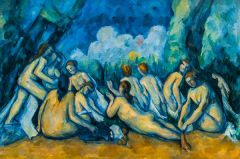 More self catering near National Gallery