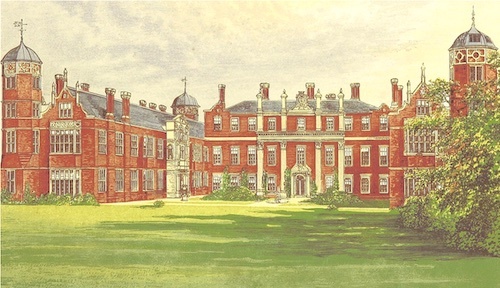 Cobham Hall in 1868
Cobham Hall is a historic country house with roots as far back as the 12th century. Even earlier than that there was a substantial Roman villa here, but it was in 1208 that the history of Cobham Hall as we know it really began. In that year Henry de Cobham, later the 1st Lord Cobham, is known to have inhabited an early manor house on the site.

The house was extended in the Tudor period, and Elizabeth I was known to have visited Sir William Brooke, 10th Lord Cobham, here in 1559. Sir William added the first of the wings which are so much a part of the Cobham design.

The Brooke family was implicated in the plot to put Arabella Stuart on the throne in place of James I, so the latter seized the estate and granted it to his cousin, Ludowick Stuart, 2nd Duke of Lennox.

In 1625 James's son Charles, later Charles I, spent his honeymoon night at Cobham with his new queen, Henrietta Maria. In the 18th century, the Hall passed to the Bligh family, later Earls of Darnley. It was the Darnley's who built the distinctive Mausoleum at Cobham.

Though Cobham Hall is a full-time school, the buildings are regularly open to visitors. See the official website for opening times.

More self catering near Cobham Hall >>