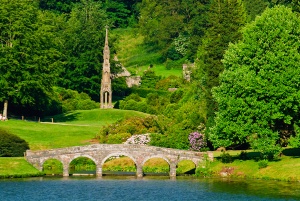 Formality...
The great gardens of the 17th century were ornate, extravagant, precisely laid out mathematical patterns. The foremost exponents of this "ultra-civilised" style were the Italians and the French, and the foremost gardener was Andre Le Notre, who laid out the gardens at Versailles for Louis XIV.

...versus the natural look
In response (or reaction) to this ornate continental style, English critics, led by Richard Addison and Alexander Pope, began to agitate for a change to a more "natural" nature in gardens.

Political gardening
As it happened, many of the voices clamouring for a new vision, a less rigorous, gentler style of garden, were Whigs. Gardening, of all things, became a political football, the battleground for philosophy and a statement of political affiliation.

Stowe, Kent, and Brown
The beginnings of what would become the landscape garden movement came at Castle Howard, and later at Stowe, under Lord Cobham and his head gardener, William Kent. Later, Kent had as his understudy Lancelot Brown. A word about this man Brown. He was to become famous as "Capability" Brown, the most influential landscape gardener in Britain. His peculiar nickname came from his habit of telling potential clients that their site had "great capabilities", which in his (pardon the pun) capable hands, it probably did.

Palladianism
Another of the prime movers of the landscape garden movement was Lord Burlington. He was fascinated by the classical building style of Andrea Palladio, an Italian Renaissance architect, and the 'picturesque' or romanticized landscape of Italian classical painting. These paintings were chock full of allegory and symbolic meaning in the form of classical temples and statues.

Take a look at the background of works by artists like Da Vinci and Poussin for examples of this style. Lord Burlington wanted to make the English landscape into one of these paintings. Under his patronage, the Palladian movement in architecture became married to the landscape gardening boom.

So, what's a landscape garden?

All right, enough background, what were the characteristics of the English landscape style of gardening? 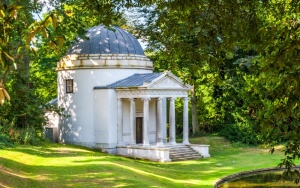 The heyday of the British landscape garden was the mid-to-late 18th century. Tastes change, and many masterpieces by men like Kent and Brown eventually fell victim to changing fashions. Some of the best remaining landscape gardens can be seen at Castle Howard, Stowe, and Stourhead. To this list can be added Blenheim Palace (the park, laid out by Capability Brown, not the formal gardens near the house).

Other good examples of English Landscape Gardens include: