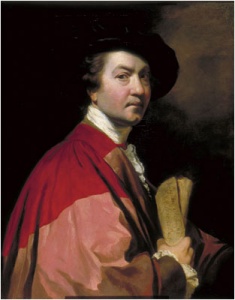 Joshua Reynolds was born in Plympton, Devonshire, on July 16, 1723, the seventh child of Reverend Samuel Reynolds and Theophilia Potter. At the age of 17, Joshua became apprenticed to Thomas Hudson, the most popular portrait painter of the age.

After 3 years with Hudson, Reynolds moved to London and tried to establish his own practice, only to return to Devon after two years. From there he travelled to the Mediterranean and spent several years studying the works of Italian masters such as Raphael and Michelangelo, and classical Roman art.

When Reynolds returned to London he made an immediate impact, especially after his formal portrait of Commodore Augustus Keppel in the guise of the Apollo Belvedere became known. With the aid of his patron, Lord Edgecumbe, Reynolds became the most popular portrait painter of his day, supplanting his old master Hudson.

Reynolds was able to afford a coach and a grand house in Leicester Fields. He was so busy that his students became responsible for painting the background of his portraits, leaving him to concentrate on the principal subject. His major paintings were also reproduced in mezzotint, a fine engraving process.

Reynolds exhibited regularly at the Society of Artists, and he was named the first president of the Royal Academy of Arts in 1768. As his eminence grew, he was knighted in 1769, and in 1784 he was appointed principal royal portrait painter.

Sir Joshua Reynolds died on February 23, 1792, and was buried in St. Paul's Cathedral.