HERITAGE HIGHLIGHTS:   One of the world's best fine art collections 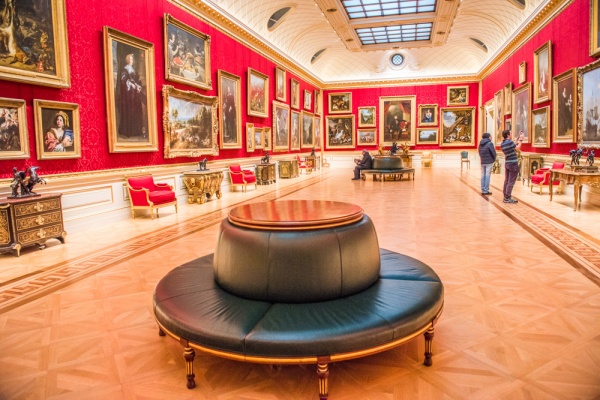 Hertford House began in 1776 as a shooting lodge for the 4th Duke of Manchester, who enjoyed duck shooting nearby. It is hard to imagine duck shooting in Marylebone today! The hunting lodge was named Manchester House after the Duke. It was later used as the Spanish embassy.

In 1793 Francis Seymour-Conway was made the 1st Marquess of Hertford. Seymour-Conway was a descendant of Edward Seymour, Lord Protector in the reign of Edward VI. The new Marquess of Hertford served as an ambassador to France, and later as Lord Chamberlain. Eight oil paintings acquired by the Marquess form the earliest part of the Wallace Collection Among these are 6 oil paintings by Canaletto and portraits of the Marquis's daughters by Sir Joshua Reynolds. 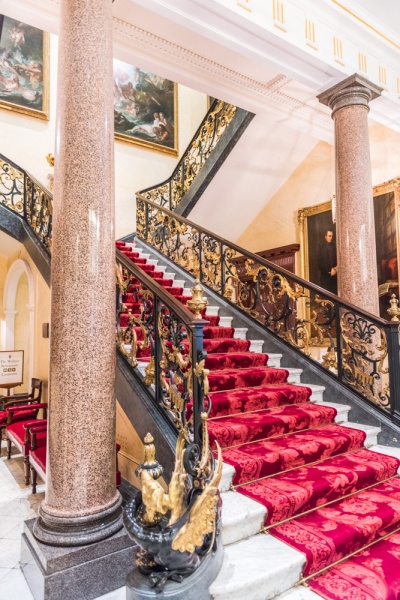 Francis Seymour-Conway was succeeded by his son Francis Ingram. Like his father, the younger Francis had a distinguished political career, and like his father, he rose to become Lord Chamberlain during the Regency.

In 1797 the Marquess purchased the leasehold of what is now Hertford House, facing onto Manchester Square. Though not an avid collector, he did acquire several pieces now in the Collection, including Gainsborough's portrait of Mrs Robinson, which was given to him by the Prince Regent.

The 2nd Marquess entertained the great and the good of London society at Hertford House. Most famously he hosted the Allied Sovereigns’ Ball in 1814 to celebrate the fall of Napoleon.

The second Francis was followed yet another; Francis Charles Seymour Conway. The 3rd Marquess caused a scandal by marrying the illegitimate daughter of a former dancer, but his marriage choice did swell the family coffers. Sadly, the marriage was not a happy one, and the couple lived separate lives, she in Paris and he in London.

The 3rd Marquess led a lifestyle best-described as dissipated; he was held up to scorn as the sinister 'Lord Steyne' in Thackeray's novel 'Vanity Fair'. But for all his failings the 3rd Marquess was a notable collector of fine art, adding French furniture and Sevres porcelain to the family collections, as well as paintings by Titian. He also acted as an agent for the Prince Regent, purchasing outstanding pieces of French and Dutch art that are still in the Royal Collection. 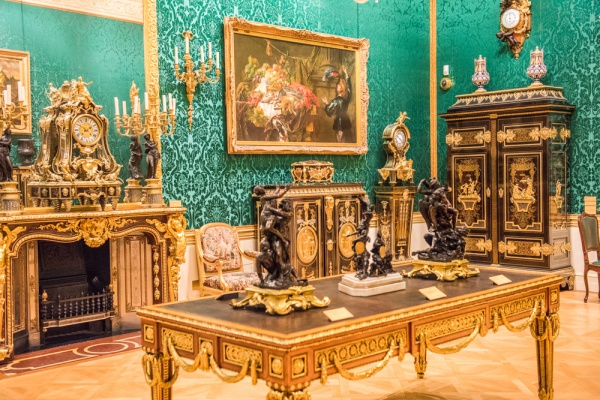 Fine furniture on the first floor

The 4th Marquess lived most of his life in Paris. As one of the wealthiest men in Europe he could afford to indulge his passion for art, and he spent the last 3 decades of his life collecting fine art. among his acquisitions were famous works such as Frans Hals's 'The Laughing Cavalier'.

Wallace purchased the lease on Hertford House from the 5th Marquess. while the house was being remodelled to accommodate the collection, it went on public display at the Bethnal Green Museum, and attracted thousands of visitors. Wallace was not as avid a collector as his father, but he did buy medieval and Renaissance art, and more importantly, he purchased several important armour collections.

In 1871 Wallace married Amélie-Julie-Charlotte Castelnau, his mistress of many years, who was working as an assistant in a perfume shop when he met her. After Wallace's death in 1890, Lady Wallace went into seclusion at Hertford House.

When she died in 1897 she left the Wallace collection of fine art to the nation. According to her wishes, the collection was closed; that is, no more works were to be purchased. The first Trustee of the collection was Sir John Murray Scott, who had been Lady Wallace's secretary. Under his direction, Hertford House was opened to the public as a museum in 1900.

Hertford House was first and foremost an elegant family home, suited to members of the British aristocracy. As you explore the collections you still get the feeling that you are moving through a stately home rather than a museum. 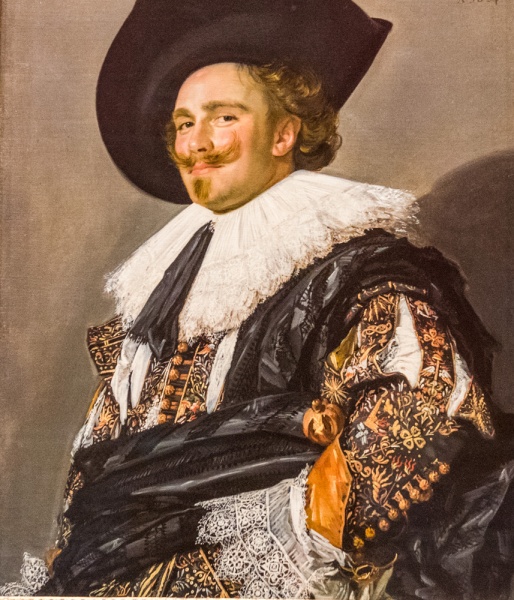 The Laughing Cavalier, by Frans Hals

The Wallace Collection is arranged over two floors of Hertford House, with more exhibition areas in the former cellars.

The collection covers 6 broad themes; Ceramics, Sculpture, Artworks, Furniture, Pictures and Miniatures, and Arms & Armour. The Wallace Collection is probably best known for its paintings, furniture, and porcelain, but its collection of arms and armour is simply superb.

There are too many items to list, but here are a few of the most famous and popular works of art in each area:

The collection features European oil paintings fro the 14th-19th century. The quality is stunning, perhaps only surpassed in England by the National Gallery. Probably the most famous work is The Laughing Cavalier, by Frans Hals. Other famous artists represented include Thomas Gainsborough, Rembrandt, Titian, Watteau, Rubens, and Canaletto.

This important collection is focussed on 18th century French Sevres pieces and maiolica ware from the Italian Renaissance. The Wallace Collection has probably the best assortment of Sevres fine porcelain in the world. There are also some 140 pieces of Renaissance maiolica, the earliest dating to the mid 15th century. There are also examples of Meissen and Chinese Celadon porcelain from the 18th century, as well as English slipware and French faience.

This rather broad category includes gold boxes, silverwork, jewellery, enamels, glassware, and illuminated manuscripts, among other delights. The gold boxes are stunning; most date to 18th century France and were made to hold snuff. One item that caught our eye was a French Renaissance enamel portrait, dated 1555. 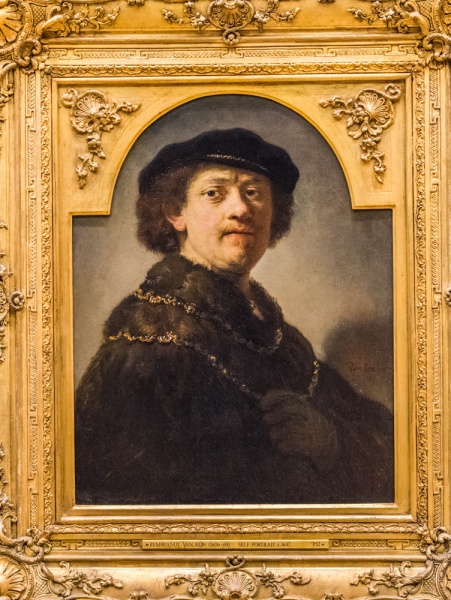 Self portrait, by Rembrandt

This is one of the best collections of French furniture in the world, with ornately decorated pieces by famous makers such as André-Charles Boulle. The oldest Boulle piece is a marquetry cabinet inspired by Dutch still-life paintings. There are some stunning Rococo pieces, including a commode made for Louis XV's bedchamber at Versailles, and a chandelier given by that same monarch to his daughter in 1752. There are several pieces owned by Marie Antoinette, including a desk from her rooms in the Petit Trianon.

There are over 500 pieces of sculpture, ranging from the medieval period to the 19th century. The French theme continues here, with one of the most impressive sculptures being the bronze bust of Charles IX, made by Germain Pilon in 1570. There are Italian marbles including a bust of Christ by Pietro Torrigiano, made for Westminster Abbey, and a wonderful group of Baroque ivories from Germany.

These are just a very few highlights. You could spend days exploring the Wallace Collection, and then even longer coming back to see it again. Once you've visited, you really will want to return again and again. This is a museum to savour and enjoy slowly.

The Wallace Collection is free to enter and is open throughout the year. It is a very easy walk from Bond Street, Baker Street, and Oxford Circus tube stations. 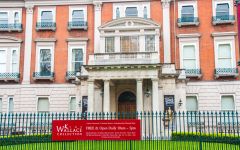 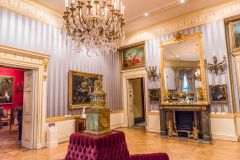 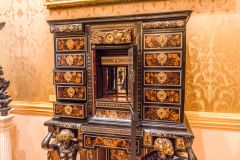 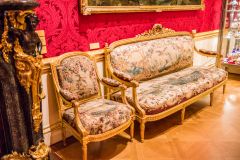 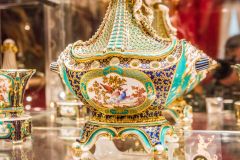 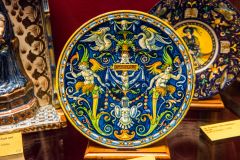 More self catering near Wallace Collection