HERITAGE HIGHLIGHTS:   The best of British portrait portraits from Tudor to the modrn era 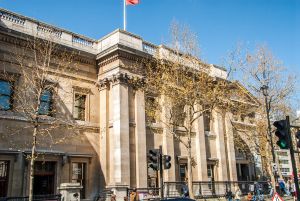 Just around the corner from the National Gallery in Trafalgar Square is the National Portrait Gallery. This is the place to come if you simply must put a face to the names you've been picking up in historical romance novels (just ask my wife). See portraits of the famous and infamous in British history from the Tudors to the 20th century.

The National Portrait Gallery was founded in 1856 with twin aims; the appreciation of men and women who have made and are making British history, and the appreciation and understanding of portraiture in all media. That latter bit of the mission statement explains why you will see not only paintings, but sculpture, sketches, miniatures, and what we might sweepingly call 'multi-media' art objects on display.

Galleries are loosely arranged by time period into 7 main collections, with separate areas for Tudor and Elizabethan, Stuart and Civil War, Georgian, Regency, Victorian and Edwardian, 20th Century, and Contemporary.

Each of these collections is further broken down into themed rooms. For example, the Stuart and Civil War collection has themed rooms covering Early Stuart Britain, Charles I and the Civil War, Science and the Arts in the 17th century, Charles II: The Restoration of the Monarchy, and The Later Stuarts.

If your interests run more to particular artists than time periods, the Gallery hosts works by some of the best-known artists in British history, including Anthony van Dyck, William Hogarth, John Constable, JMW Turner, Thomas Gainsborough, and many, many more.

What I found fascinating while exploring the Tudor galleries was just how many paintings of the Tudor court were by 'An Unknown Artist'. This points to a fascinating bit of social history; at that time period the artist was not as important as the subject. It was not until centuries later that we start to see 'big name' artists become the pop stars of their age. 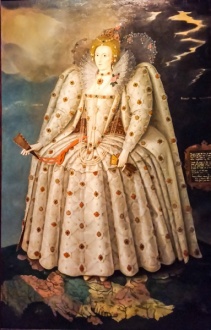 The Ditchley Portrait
of Elizabeth I

Among the more famous individual works of art that caught my eye on our last visit was 'The Ditchley Portrait' of Elizabeth I. This painting by Marcus Gheeraerts the Younger shows Elizabeth in her court dress, standing on a map of Britain. It was painted in 1592 and is one of the very few portraits of the ageing queen to show her realistically, not with an overly flattering youthful face and hair.

Another work that I noticed was The Relief of Lucknow 1857, by Thomas Barker, showing a heavily idealised version of the moment when the British Embassy at Lucknow was relieved after a long siege during the Indian Mutiny. It is fascinating to see how the Victorians wanted to portray their own heroes and the defeated Indian rebels in this scene.

Then there is a wonderful self-portrait of William Hogarth at work on his easel, leaning forward intently with his pallet of colours.

Another eye-catching work for me was The Trial of Queen Caroline 1820 by Sir George Haytor, capturing the sensational trial of Caroline, consort of George IV, before a packed House of Lords. The painting captures the tumult of the trial that scandalised Britain and helped polarize opinion against George.

Those are just a few paintings that caught my eye on our last visit, but no matter which artist, or time period you enjoy, there is something for everyone. Every time we visit I find something new or learn something about a famous person in British history that I didn't know.

The National Portrait Gallery holds the largest collection of portraits in the world. Portraits are displayed not only at the Gallery in London, but at several regional venues and stately homes around Britain. A very large collection of medieval and Tudor portraits are held at Montacute House in Somerset, and several other National Trust properties around the country also hold smaller collections.

The National Portrait Gallery is located immediately behind the National Gallery, a few steps from Trafalgar Square and about a 5-minute stroll from Charing Cross rail and underground stations. 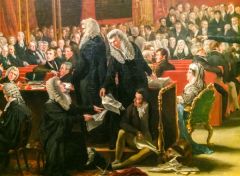 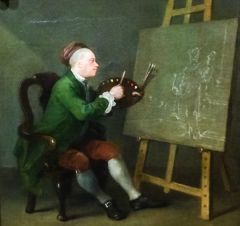