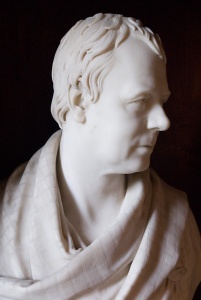 Walter Scott was born in Edinburgh, Scotland, on August 15, 1771. His father, also called Walter, was a solicitor. An early childhood illness left Scott lame in his right leg. He was educated at Edinburgh High School and studied law at Edinburgh University.

Young Walter apprenticed to his father in 1786 and became a solicitor in 1792. In 1797 he married Margaret Charpentier, with whom he had five children.

Walter Scott was fascinated by the culture and traditions of the Scottish Borders, and in 1802 he published his first literary work, Minstrelsy of the Scottish Borders. It was his second work which made his name, however; The Lay of the Last Minstrel (1805) was an immensely successful poem. Scott followed this with further romantic poems, such as Marmion (1808) and The Lady in the Lake (1810)

In 1806 Scott launched a publishing business with his friend James Ballantyne. The business proved unsuccessful, and Scott spent the rest of his life paying off the debts incurred by Ballantyne. 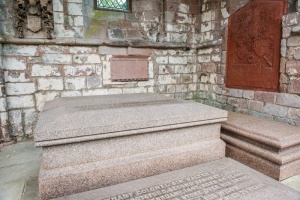 In the decade between 1810 and 1820, Walter Scott published a succession of hugely popular historical novels, beginning with Waverly (1810), Guy Mannering (1815), and Ivanhoe (1819). These books, and others that followed in the 1820s, were published anonymously or under pseudonyms. It was not until 1826 that the author was revealed to be Sir Walter Scott.

Scott took on a wide variety of themes in his writing; works on Scottish history, such as Rob Roy and A legend of Montrose, stories of the medieval period, such as Ivanhoe, and Talisman, and biography, such as his Life of Napoleon.

Lady Margaret Scott died in 1826, and Walter Scott followed her in 1832. He was buried at Dryburgh Abbey. Though he struggled against debt his whole life, the proceeds from his writings eventually repaid his obligations in full. He helped popularize the historical novel as a literary genre and influenced generations of future writers.

To see:
In addition to Scott's grave at Dryburgh Abbey mentioned above, there is also his home of Abbotsford House, near Melrose
Scott's View - A panoramic viewpoint favoured by Scott
Smailholm Tower - Scott grew up beside this medieval fortified tower