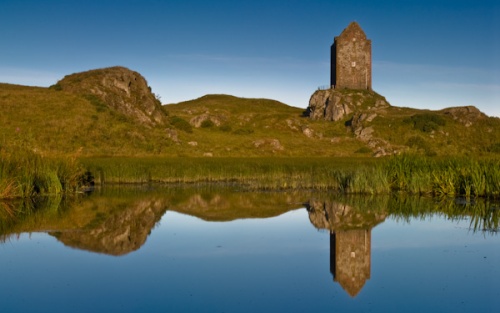 An externally perfect example of a small fortified tower house, Smailholm occupies a prominent position atop Lady Hill, near Sandyknowe in the Scottish Borders. The location gives wide-ranging views to the Cheviot, Lammermuir, and Eildon Hills.

The tower was built in the early 15th century by the Pringle family, squires of the powerful Black Douglasses who ruled much of the Borders. The style of Smailholm is very similar to the Douglas's own at Newark Castle, emphasising the ties between the Pringles and their lords (though it seems that the Pringles obtained a license in their own right to their estates in 1455-59).

The tower stands five storeys high, reaching 20 metres (65 feet), on a rectangular plan, with walls over 2 metres thick. The material is mostly whinstone, dressed with red sandstone at the corners. The tower house stands within a barmkin; a walled enclosure, which itself still stands to 2 metres in places. The tower defences include a pair of gun loops; openings for hand-held firearms. 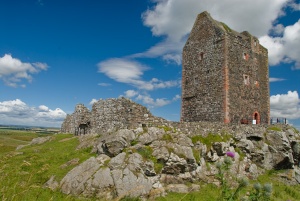 The ground level was used as a storeroom, with a hatch in the roof so that food could be raised and lowered from the first-floor hall above. The hall served as the main public room, an all-purpose chamber used for meals, socialising, and administration. There are large windows to admit light, but these are protected with iron grilles, again emphasising that the owners of Smailholm lived in uncertain times.

The upper chambers of the tower were used for sleeping quarters and other private rooms. The top storey was rebuilt in the late 16th or early 17th century to create a watch station.

This addition was likely in response to an Act of Council of 1587, which required every landowner in the Borders to keep watch day and night and light a beacon fire to warn of trouble. There is a small stone seat for the watchman, with a niche to protect a lantern.

The seat looks towards Hume Castle, about five miles away, which would have had its own watchman and provision for lighting a beacon.

There were probably outbuildings within the barmkin, including guest accommodation and a kitchen. In the early 17th century Smailholm was purchased by the Scott family of Harden. The Scotts built another, smaller dwelling inside the barmkin, probably replacing the earlier guest houses and kitchen.

This smaller dwelling was later torn down, leaving only the late medieval tower. The Scotts then leased Smailholm to a relative, Walter Scott, known as 'Beardie'. Beardie Scott is better known to history as the grandfather of author Sir Walter Scott. 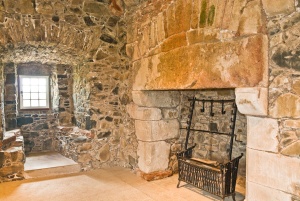 Walter Scott was sickly as a child, and in 1773 his parents sent him from his Edinburgh home to Smailholm, in the hope that the fresh countryside air would benefit his health. He was only 18 months old when he came to Smailholm, and he did not live in the tower, but in the nearby farmhouse of Sandyknowe, in the dell just below it.

He was brought up by his grandfather and his aunt, brought up on stories of the countryside, of the tumultuous history of the Borders. These Border ballads, combined with the visual reminder of the romantic tower, affected Scott's imagination and helped inspire some of his most remembered writing.

In his 1802 Minstrelsy of the Scottish Borders, he related some of these tales. There is an exhibition in the Tower about Sir Walter Scott's life and his association with Smailholm and the Borders region. Scott is buried at nearby Dryburgh Abbey.

Access is through Sandyknowe Farm, and there is a small parking area. Do come prepared with good footwear, as the ground can be muddy - you are essentially standing in a farmyard for a start!

The exhibitions are fascinating, and there is a good audio tour (free when we visited). It won't take terribly long to visit; Smailholm is not a large house, but it certainly does present an interesting picture of what life was like in the turbulent Borders, when residents were always on the lookout for raiding parties.

NB. There seems to be some dispute about the date of Smailholm. Historic Scotland, who look after the site, call it 15th century, while many other sources refer to it as 16th century. I've gone with the official version in this article. 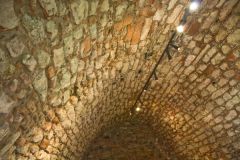 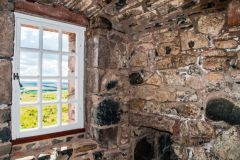 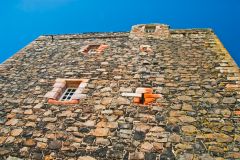 More self catering near Smailholm Tower