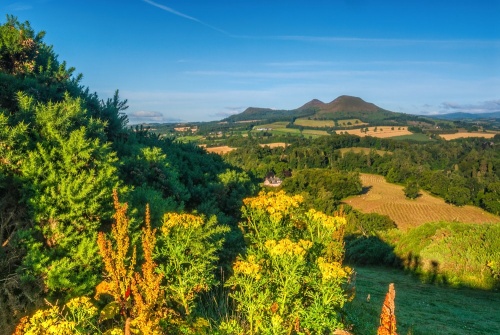 Author Sir Walter Scott loved the Scottish Borders. His favourite place to sit and reflect was at Bemersyde, where the vista opened out to the west, offering breathtaking views over the River Tweed to the Eildon Hills. Scott grew up at nearby Smailholm Tower and in later life he lived at Abbotsford House.

Tradition says that Scott's horses became so accustomed to stopping at the viewpoint on their master's daily outings that they would stop without command when they reached this spot.

When Scott died in 1832 the horses were hitched to the hearse bearing the author's body to Dryburgh Abbey for burial. As the funeral cortege reached Scott's View the horses stopped out of habit to allow their master a last look at the landscape he loved.

A contemporary report of the event in JG Lockhart's 'The Life of Scott' (1872) simply says that the cortege stopped at the viewpoint for a few minutes due to an (unspecified) accident.

But what did Scott see from 'his' viewpoint?

From the hilltop site the land drops away to the Tweed Valley and a landscape of fields and trees stretch away westwards to the historic town of Melrose and the Eildon Hills. Immediately below the viewpoint is an area of semi-natural woodland. Trees here were once used to make coffins.

You can also look down on the original site of Melrose Abbey, known as Old Melrose, which occupied a loop in the River Tweed. Just beyond Old Melrose is the site of a Roman fort known as Trimontium.

The Eildon Hills are prominent local landmarks, formed by volcanic activity and later used by Bronze Age settlers. They are said to be the final resting place of Thomas the Rhymer, a 13th-century poet who was granted the gift of prophecy by the fairy people who live in the Hills.

From the B6404 between Kelso and St Boswells turn off onto the B6356, following the signs to Dryburgh Abbey. After one mile (1.6km) you will see a signpost to Scott's View on the right. Follow this minor road for another two miles and you will come to a free car park for Scott's View.

We've visited several times and it really is a lovely place to take in the scenery. It is a very short distance from Dryburgh Abbey in the valley below, so combining the two sites in a single outing makes perfect sense.

More self catering near Scott's View