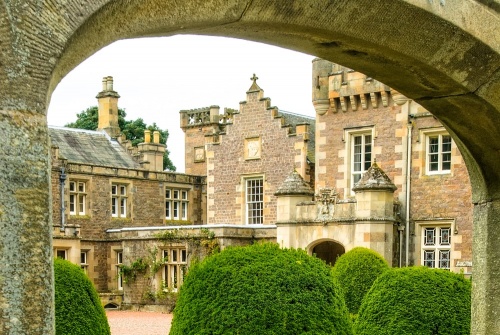 In 1811 author Sir Walter Scott purchased a modest farmhouse near Melrose, known as Cartleyhole (or, depending on which source you prefer, Clarty Hole). A few years later he extended the farmhouse to the southwest, but in 1821-2 he called in architect William Atkinson to completely redesign the house.

The farmhouse was completely demolished, and a new, much larger house begun, in a fanciful style that would later be termed Scottish baronial. So popular was Scott as a writer that his new house set a fashion for architecture that would influence Scottish buildings throughout the 19th century. 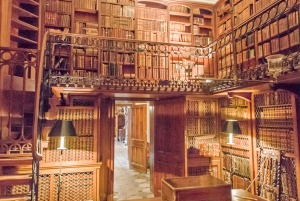 The original 'new' building forms the core of Abbotsford House, where Scott lived and worked until his death in 1832. And work he did; in 1826 Scott's business publisher and business partner fell into debt, and though not personally responsible, Scott took it upon himself to repay his partner's creditors.

Here at Abbotsford, he worked tirelessly, writing book after book in his wood-panelled study, and ruining his health in the process, in order to pay off the debts accumulated by his publisher.

From the front, Abbotsford appears to be only two storeys high, but from the rear, facing the river, the sloping ground has allowed a lower, basement level to be built. In 1853 Scott's house was greatly expanded, with the addition of a chapel, kitchen, and domestic chambers.

The influence of Abbotsford

Scott looked far and wide across Scotland for decorative elements to embellish his house; he rescued architectural fragments from houses and took casts from existing houses to create copies that reflected Scotland's architectural heritage.

The result was a very 'Scottish' building, inspired by Scotland's heritage and containing pieces from a variety of dwellings across the country. This very nationalistic pride in Scottish heritage was typical of Scott and his work. The result was almost universally popular, and Abbotsford became a very popular place for sightseers almost immediately. 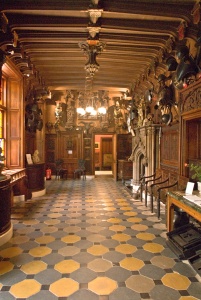 The popularity of the house led to the Abbotsford style being copied and embellished, eventually creating the very typical Victorian style we now call Scottish Baronial. One of those influenced was Queen Victoria herself. The queen stayed at Abbotsford on her first trip to Scotland and was so influenced by Scott's home that she remodelled Balmoral Castle in the same style.

Designed by Scott and unaltered since 1818, the Armoury displays swords and guns, including a blunderbuss used by Scott himself. Other prizes include Rob Roy's broadsword, and the keys to Lochleven Castle, tossed into the loch after Mary, Queen of Scots escaped from her island prison.

Scott took a hand in designing the Dining Room, with its panelled ceiling and elegant plasterwork. It was here in that he died in 1832. The Chinese Drawing Room is a beautifully decorated Oriental chamber with early 18th-century Chinese wallpaper, a gift from Scott's cousin, who worked for the East India Company.

One feature that might be easy to overlook is the gas lustre, looking like a chandelier. This dates from around 1823 and is a reminder that Abbotsford was the very first house in Scotland to install gas lighting. In the drawing room is a silver urn given to Scott by Lord Byron. 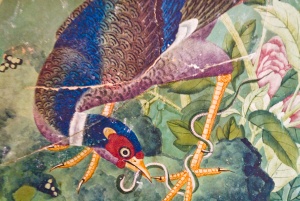 Perhaps my favourite room at Abbotsford, this deliciously panelled chamber is just as Scott arranged it, with 7000 books lining the walls. The ceiling is wonderfully decorated with carved pendants in a mock-Gothic style, but it is the books that draw your attention; these are in 17 different languages and cover folklore, history, travel, witchcraft, and more.

Some stately homes have libraries where you suspect the owners never even looked at the books, but at Abbotsford the opposite is true; Scott used his book collection for inspiration and drew heavily upon his collection. Many of the books have annotations in Scott's handwriting.

If he used the library for inspiration, it was in his cosy study that Scott produced his literary classics. He had company; over 2000 books line the walls. There are fascinating objects in this room; the writing desk and chair are just as he left them, dominating the chamber.

A second chair is the Robroyston Chair, made from wood rescued from the house where William Wallace was betrayed and captured. Scott's death mask also stands rather poignantly in this room.

A chamber that Scott would not have recognised is the Chapel, built in 1855 by his granddaughter Charlotte after she and her husband converted to Catholicism. Cardinal Newman visited frequently and conducted services here, and gifts he gave the Scott family are on display. 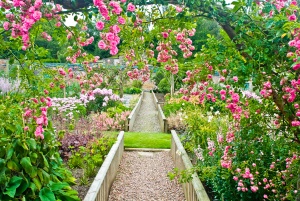 There are three main garden areas at Abbotsford; a walled garden, formal entrance courts, and a woodland, with walking trails. Leading off the walled garden, with its orangery designed by Scott, is the Morris garden, named for a character from the novel Rob Roy.

The Entrance Courts were only planted after Scott's death; they feature clipped topiary and gravelled walks. In the centre is a stone basin upon a plinth; this came from the Tolbooth in Edinburgh, where it was famously filled with wine in 1660 so that people could drink to the Restoration of Charles II to the throne.

It was a rather dismal day when we visited, but the weather cleared enough for us to enjoy a wander through the gardens, which, though not large, are beautifully laid out and full of colour.

For almost two centuries Abbotsford was under the ownership of Scott and his descendants, but in 2004 it passed into the care of a charitable trust. A new visitor centre has been built, with displays on the life and work of Sir Walter Scott, and the history and development of the house. Visits are by guided tour, and I must say that our tour guide was exceptional. The tour was entertaining, interesting, and thoroughly enjoyable.

Much of the tour, unsurprisingly, focusses on Scott, and the richly panelled library where he worked is an absolute treat. But the house is also full of fascinating objects brought here from around Scotland, including artwork, armour, and architectural detail. It truly is a fascinating house. I thoroughly enjoyed visiting Abbotsford and can recommend it without reservation. 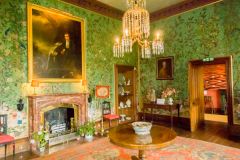 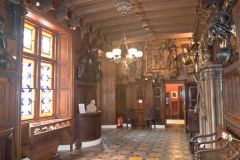 More self catering near Abbotsford House