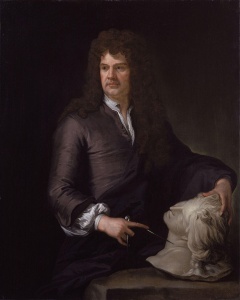 The most famous English woodcarver of all time was born, oddly enough, not in England at all but in Rotterdam, in what is now Holland, in 1648. Grinling Gibbons did not set foot in the British Isles until sometime around 1670 or 1671.

In those days a craftsman needed to be recognized and promoted by patrons to make his work widely known.

Gibbons was fortunate in that he was blessed with extraordinary talent in woodworking, and that his talent was recognized and promoted by a succession of patrons until he eventually came to the notice of Charles II.

Charles gave Gibbons commissions, as did William III and George I. Gibbons was also a favourite of the premier architect of the age, Christopher Wren. Wren called upon Gibbon to supply decorative carving for many of his country house commissions. 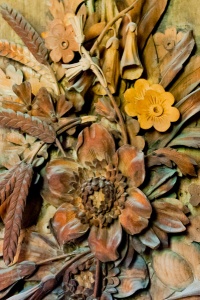 The genius of Gibbons is not simply that he had a remarkable ability to mold and shape wood, but that he evolved a distinct style that was all his own. Working mostly in limewood, Gibbons' trademark was the cascade of fruit, leaves, flowers, foliage, fish, and birds. Such cascades could be applied to paneling, furniture, walls, or even chimneys.

Perhaps to prove that he was not limited in his ability to the cascades, Gibbons produced a cravat made of limewood in a perfect imitation of Venetian needlepoint. The "cravat" was so lifelike that a foreign visitor was fooled into thinking it the standard dress of the English country gentleman!

Horace Walpole, who is known to have later worn the cravat on at least one occasion, remarked in 1763, "There is no instance of man before Gibbons who gave to wood the loose and airy lightness of flowers". The cravat is now on display in the Chapel at Chatsworth. 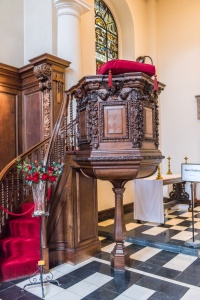 Much of Gibbons work survives in isolated country houses, but Hampton Court Palace near London is blessed with an abundance of fine carvings by the Dutch-born master.

William III commissioned Gibbons to redecorate his State Apartments, and was so impressed by the result that in 1693 he gave Gibbons permission to use the title "Master Carver".

Such carvings as the ones at Hampton Court are filled with symbolism which would have been apparent to an educated observer of the day, but which would escape most modern observers. Very often each object in the carving would have a particular meaning or reference to a classical Greek or Roman ideal or story.

Some of Gibbons best work outside Hampton Court survives at Petworth House in Sussex, in particular a ceiling he designed for the Duke of Devonshire, and at Lyme Park and Dunham Massey in Cheshire, Belton House in Lincolnshire and Sudbury Hall in Derbyshire. Other fine examples of his work can be seen at Windsor, and St Paul's in London. Also in London, the font at All Hallows by the Tower church has a wooden cover carved by Gibbons in 1682.

Grinling Gibbons work had an enormous influence on interior design and decor during the Golden Age of the English country house. Later craftsmen such as Thomas Chippendale are known to have been heavily influenced by his work. Grinling Gibbons died in 1720.

Birth of Mary, Queen of Scots

Mary (d. 1582) was born to James V and Mary of Guise. Her father died only 6 days later and she was crowned at the age of nine months.