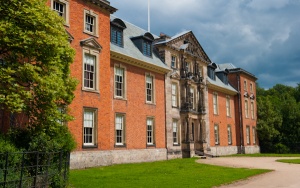 The red-brick house of Dunham Massey was begun in the Georgian period, but the present structure is a product of heavy restoration in the Edwardian years. The result is a superb example of that period, an ornate, almost overwhelming interior, with wonderful collections of Georgian furniture, paintings, and silver.

The Dunham estate was granted to the Massey family shortly after the Norman Conquest. The estate passed down through the female line of the Massey family until 1453, when the Booth family acquired the estate through marriage. The Booths were about as posh as posh could get in 15th century Cheshire, producing 2 Mayors of Chester, a Bishop of Exeter, and an Archbishop of York.

There was a moated medieval manor house here when the Booths got their hands on Dunham Massey, but in the late 16th century this was rebuilt by Sir George Booth. Booth's grandson, also named George, raised an army in 1659 to support the Royalist cause.

The revolt failed, and Booth landed in the Tower of London. The following year, however, saw the Restoration of the Monarchy, and the new king, Charles II, rewarded Booth with a peerage, making him Lord Delamere. 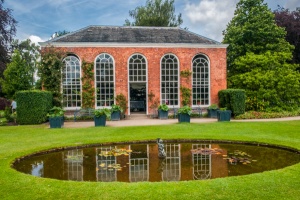 That did not stop Booth from supporting the Duke of Monmouth's Rebellion two decades later. Lord Delamere entertained Monmouth at Dunham Massey, when 'the rabble' were allowed to come inside the house to view the Duke, and each was given a blue ribbon to signify their support for Monmouth's cause.

Lord Delamere died in 1684, but his son was deemed suspect and brought to trial before the House of Lords for high treason, following Monmouth's execution. He was acquitted, and just 2 years later raised troops to support William of Orange. William rewarded him with the title, Earl of Warrington.

In the 1770s the 2nd Earl of Warrington completely remodelled the house, giving it an elegant Georgian facade of red brick and filling the interiors with his collection of silver and porcelain. Most of the silver came from Huguenot silversmiths, which he patronised partly due to his strong Protestant inclinations.

The 2nd Earl also laid out the extensive parkland around the house. The money to make all these improvements to Dunham Massey came from an advantageous marriage to the daughter of a wealthy London merchant.

Though the new Countess brought money to the union, the marriage itself was a disaster. The couple fell out so badly that they would not speak to each other, and lived in the house as strangers. So bad did the marriage become that the Earl wrote a pamphlet advocating divorce on the grounds of 'incompatibility of temper'.

And thus the house remained until the Edwardian period, when the 9th Earl of Stamford added an imposing entrance centrepiece on the south front, made of stone, which gives the earlier Georgian facade a rather peculiar look. The 9th Earl also redecorated many of the state rooms in Edwardian style, including the Great Hall and Green Saloon. 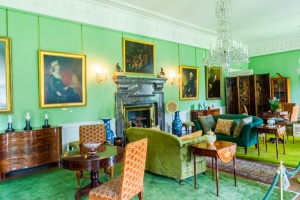 Dunham Massey is built around two courtyards, one cobbled and the other centred around a fountain and informal garden. Tours of the interior take visitors through the ranges around the main court, with the highlight being the library.

A crucifix by Grinling Gibbons hangs above the mantlepiece, and models of the heavens stand beside the bookshelves. In the Tudor long gallery is Dunham Massey's most prized painting, Mars, Venus, and Cupid with Saturn as Time, by Guercino.

Interest is not confined to the sumptuous showrooms; the servant's quarters have been restored to provide a glimpse of life below stairs.

The house is set in attractive gardens of special interest to keen plantsmen. An orangery shares space with fine old trees and planted borders, a Victorian bark house and well house. The deer park surrounding the house and gardens contain lovely walks beside ponds. Deer wander the grounds and visitors can get quite close to them.

Because it is located so close to several large urban areas and motorway networks, Dunham Massey has become extremely popular with families having a weekend outing. When we visited on a sunny Saturday in Spring it seemed as if half of Manchester had turned up to enjoy the parkland, though not necessarily the house. 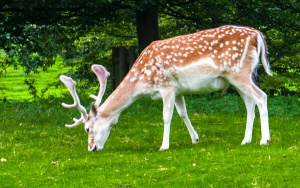 Deer grazing in the grounds

So if I have one general tip for visiting the house it would simply be to come in an offpeak time if you can; that is, on a weekday, and not during half-term breaks. On the other hand, the parkland and grounds surrounding the house is certainly large enough to deal comfortably with lots of people.

Now, with all those caveats out of the way, let e say how much our family enjoyed visiting. The first unexpected pleasure was seeing the herds of deer wandering past the path to the main entrance. The deer have become so accustomed to people that they aren't terribly bothered if you come quite close while they graze. Closer to the house, I thought the formal gardens were an absolute delight, with lots of hidden corners to explore.

And as for the house, well, it was simply stunning. The interiors were bursting with fine furnishing and artwork - of course most stately homes are.

One thing we enjoyed was the relaxed atmosphere. a room steward asked if my son wanted to play the grand piano, so he got to enjoy playing a superb musical instrument in a gorgeous setting, while we enjoyed the sound of music filling the house. It was quite magical.

There is a good display of 'below stairs' life at the house, including the kitchen and a fascinating glimpse into the laundry room.

All told, we had a wonderful visit, and would definitely return (though I think I'll opt for a weekday next time!) 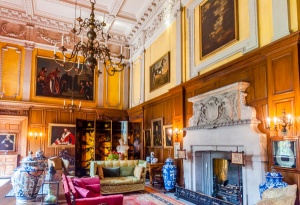 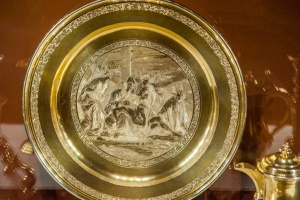 More self catering near Dunham Massey