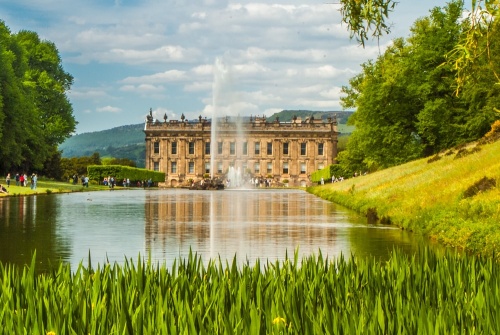 The home of the Dukes of Devonshire, Chatsworth is one of the true treasure houses of Britain, set in extensive parklands beside the River Derwent. Begun as an Elizabethan mansion by Bess of Hardwick, rebuilt starting in 1686. Everything is on a massive scale, opulent and designed to impress (it does). Too much art and furniture to mention.

The first house at Chatsworth was the work of Bess of Hardwick (c. 1527-1608, see Hardwick Hall) and her second husband, Sir William Cavendish. Bess convinced Sir William to sell his lands elsewhere and build a new house at Chatsworth on the site of an older manor. Construction began in 1552 and went on in fits and starts over the ensuing decades. We know little about that house, which was situated where the current house now sits. 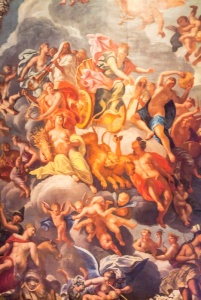 When Sir William died in 1557 Bess married twice more. The second of those marriages was to George Talbot, 6th Earl of Shrewsbury (c. 1528-90). Queen Elizabeth appointed Shrewsbury to the post of gaoler to Mary, Queen of Scots.

Over the period 1569-1584 Mary spent considerable time in captivity at Chatsworth, and her suite of rooms in the east end of the house is still known as the Queen of Scots Apartments. These apartments are open to the public by extra admission charge.

The 4th Earl (1640-1707) had the south front torn down in 1686 to make way for a magnificent suite of State apartments to receive a visit from William and Mary. He must have had an inkling that he was going to need showpiece rooms in keeping with a rise in statues; in 1694 he was created first Duke of Devonshire.

Building continued at a fast pace under the first Duke; the East, West, and North Fronts, Long Gallery (now the Library) and Painted Hall followed the State Apartments. Grillet was brought in to construct the wonderful Cascade, a man-made waterfall to the west of the house.

The Cascade needed a focal point; a classical temple at the head of the drop, and Thomas Archer was called in to provide this and the design for the North Front. George London and Henry Wise designed extensive formal gardens, and in 1702 a hill was levelled to provide space for the new Canal Pond. 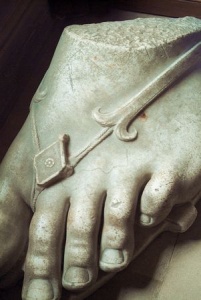 Statue of a foot

The second Duke did not alter the fabric of the house to any great degree, but he found space within the house for his growing collections of art, coins, and gems. The Third Duke is responsible for much of the early 18th-century furniture at Chatsworth, most originally designed by William Kent for Devonshire House in London.

It was left to the 4th Duke to substantially alter Chatsworth once more; most dramatically he had Edensor village pulled down because he objected to the view. Capability Brown was called in to create a landscape garden where the village had once been, and James Pain was called in to create what must surely be one of the most elaborately ornate stable blocks in the world, just uphill of the house.

Chatsworth began with one remarkable woman in Bess of Hardwick; it was about to have another. The 5th Duke married Lady Georgiana Spencer, one of the leading lights in high society and a political hostess of the first importance. Lady Georgiana set tongues wagging when she became actively involved in political campaigning, something considered not at all suitable for a lady at that time.

The Duke and Duchess lived primarily in London, but when the came to Chatsworth they were given to lavish entertainment. The Duke initiated the custom of giving a monthly dinner for anyone who wanted to come. Lady Georgiana's only son became the 6th, 'Bachelor' Duke (1790-1858).

The 6th Duke entertained on a lavish scale and embellished Chatsworth and other of his properties to such a degree that he was forced to sell off several properties to avoid bankruptcy.

The 6th Duke developed a keen interest in gardening, and in 1826 he began a partnership with Joseph Paxton which was to create at Chatsworth the gardens you can see today. Paxton designed the Great Conservatory, a ground-breaking design in glass, iron, and wood, which would serve as an inspiration for his later design of The Crystal Palace for the Great Exhibition of 1851 in London. The Great Conservatory was located where the Maze now stands.

Paxton also designed the striking Emperor Fountain in the Canal Pond. This entailed creating an 8-acre reservoir on the hill above to create a gravity-fed supply of water for the fountain. The Emperor Fountain is among the tallest gravity-fed fountains in the world, reaching a height of 280 feet. 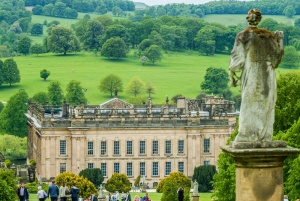 View from the cascade summit

One of Chatsworth's most popular features in this striking waterfall, built by Grillet for the 4th Duke. The Cascade drops down over 200 vertical feet in a fall of 24 steps. Each step is of different size and shape so that the sound made by the water as it runs down the Cascade is unique and never monotonous.

Standing where Paxton's Great Conservatory once stood, the Maze is a high hedge designed to bamboozle the most astute navigator. Once you've spent your wits finding the centre of the Maze, you have to wander your way out again!

Created by the first Duke, the Painted Hall is the first major room that visitors to the house see. The Hall contains vast wall and ceiling paintings depicting scenes from the life of Julius Caesar.

There are so many real treasures at Chatsworth that it is hard to know where to begin. There is statuary scattered throughout the house, but the bulk is on display in the Sculpture Gallery. Highlights of the collections on display include four royal thrones, a striking ancient Greek marble foot, and a titanium fan of a Rolls Royce jet engine.

The oldest room in the house. It is richly furnished, with carvings and panelling bought by the 6th Duke from a German monastery.

This suite of rooms in the East Wing once housed Mary, Queen of Scots during her time in captivity. The rooms themselves are so much altered that Mary herself would never recognize them.

In the event that your children are not impressed by ornate interiors and art treasures, there is plenty more to occupy the younger generation at Chatsworth. The Farm allows children the opportunity to see animals up close. The Adventure Playground is a very popular activity area for children of all ages - and a bit of fun for parents as well!

The adventure playground at Chatsworth was appreciated by both our children (age 10 and 4). Petting the farm animals was fun, and the milking demonstration was interesting, but the real hit with both of them was the playground equipment. There was a secret tunnel, and kid-sized digging machines and plenty of sand. And there was water -- to be pumped, to be dammed, to be diverted.

Both my children liked the huge climbing frame best, complete with overhead walkways, slides, and trampoline, but there were several other fun play stations, including some suitable for toddlers. Best of all was lots of shady seating for parents. 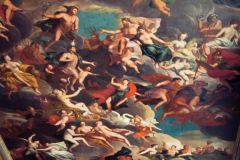 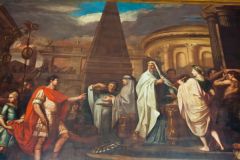 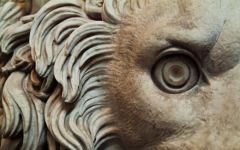 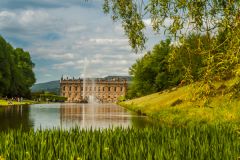 More self catering near Chatsworth

More bed and breakfasts near Chatsworth