HERITAGE HIGHLIGHTS:   Shrine of St Oswald, and the tomb of King John 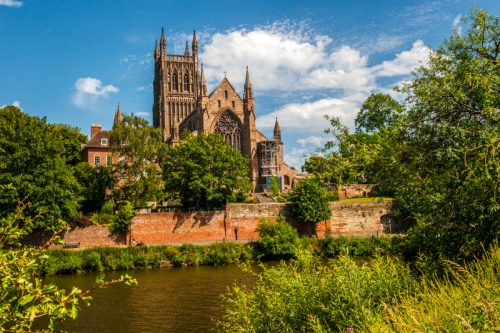 Worcester Cathedral is blessed with one of the most pleasing locations of any English cathedral, with the possible exception of Durham. The cathedral sits on level ground beside the River Severn, and seen from the river - the favoured viewpoint for guidebook photographers - the aspect is of timeless serenity.

Approach through the city on foot, however, and your first impression may be one of disappointment, for heavy restoration work in the Victorian period has left its mark. Almost all the outer stonework is Victorian, as are the west front and the eastern end of the building. The cathedral precincts are hemmed in by modern brick buildings so that it can be hard to get a good view.

The cathedral is surrounded by surviving bits and pieces of the Benedictine monastery that was founded here in 680AD. The remains of the cloister and the walled gardens create a quadrangle which gives the cathedral close the intimate air of an Oxford college. 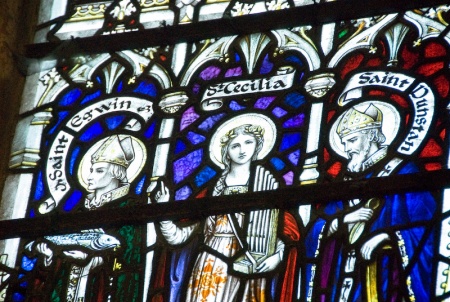 In 680 the see of Worcester was created by the monks of Whitby, under the protection of the powerful kings of Mercia. In the 9th century, Viking raiders travelled up the Severn, causing the monks to scatter and flee for their lives. In the relative peace following the Viking period, monasticism flourished and the Benedictine monastery here became one of the most powerful in the land.

The story of the growth of Worcester Cathedral from these Saxon roots is dominated by two men, Bishops Oswald and Wulstan. Oswald, later St Oswald, was made bishop in AD 961. It was he who established the monastery church, or minster.

In 1062 Wulstan was named Bishop of Worcester, a position he was to hold under the most difficult of circumstances through the Norman invasion. Wulstan was the only Saxon bishop to retain his see under the Normans, a reward for repeatedly preaching that the English defeat was a punishment from heaven for their sins.

Wulstan made the decision to pull down Oswald's church and build a fine new cathedral. Only small portions of the transepts remain above ground from Wulstan's building, but below ground, it is a different story; the crypt constructed by Wulstan to contain the shrine of Oswald is a remarkable bit of architecture, and one of the most attractive parts Worcester Cathedral. Around 1120 a round chapter house was added.

Wulstan was canonised in 1203, and Worcester became a popular centre of pilgrimage. When King John lay dying of his famous "surfeit of peaches" in 1216, he asked to be buried in Worcester Cathedral, and his wish was carried out. His tomb is a fanciful creation of dark Purbeck marble topped with an effigy. Just two years later the church was rededicated in the presence of John's son, Henry III. 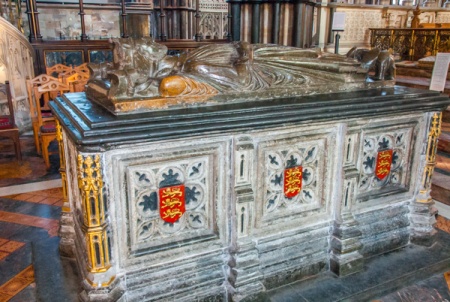 Nearby is the Lady Chapel, begun by Bishop Blois in 1224. Blois also began the rebuilding of the choir, and there, too, much use was made of the Purbeck stone. The Lady Chapel and choir are ascribed to Alexander Mason, who may have been responsible for the nave at Lincoln.

The Norman nave was rebuilt in the 14th century, and a central tower added in 1374. The cloisters were created at the same time. There was also an octagonal bell tower outside the Lady Chapel, but this was destroyed during the Commonwealth.

As mentioned earlier, a large amount of restoration work was performed in the Victorian period, and the interior is blessed with some of the finest Victorian sculpture in England, some of it the work of Sir George Gilbert Scot.

Worcester Cathedral is home of the famous Three Choirs Festival, an annual choral event which is rotated between the cathedrals of Gloucester, Hereford, and Worcester. There is an exhibition in the crypt on the early history and Archeology of the cathedral.

Aside from King John, mentioned above, Worcester Cathedral is the final resting place of several other luminaries. Prince Arthur, the eldest son of Henry VII and heir to the Tudor throne, is buried in the choir, while in the nave lie two royal commanders-in-chief. Sir Thomas Lyttleton led the royal army under Charles I in the Civil War, while William Hamilton, who held the same post under Charles II, died from wounds inflicted during the Battle of Worcester.

The best views of Worcester Cathedral are to be had from the cricket grounds on the opposite bank of the Severn. 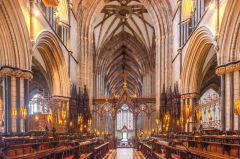 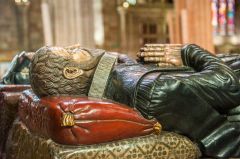 More self catering near Worcester Cathedral