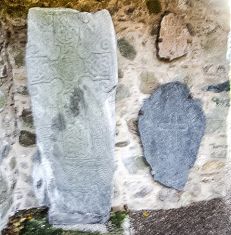 Dyce Symbol Stones
A collection of carved Pictish stones has been gathered inside the ruined church of St Fergus at Dyce, just outside Aberdeen airport. There are two Pictish stones, rather unimaginatively named Dyce I and Dyce II.

Dyce I is an incised stone bearing traditional Pictish symbols including a double disc and Z-rod as well as a Pictish Beast in the act of swimming. The stone is thought to date to about AD 600.

Dyce II is perhaps the most interesting stone. It is a cross slab with a carved Celtic cross decorated with spiral work and knotwork around a central boss. At the base of the cross are Pictish symbols including a double disc with Z-rod, a triple disc, a mirror, and a crescent with V-rod.

On the reverse of the stone is an Ogham inscription which has been transcribed as 'EOTTASSARRHETODDEDDOTS MAQQ ROGODDADD'. The meaning of the inscription is unclear.

St Fergus Chapel dates to the 13th century, with much later rebuilding. Outside the west doorway is a stone with a hollowed top, perhaps an ancient font.