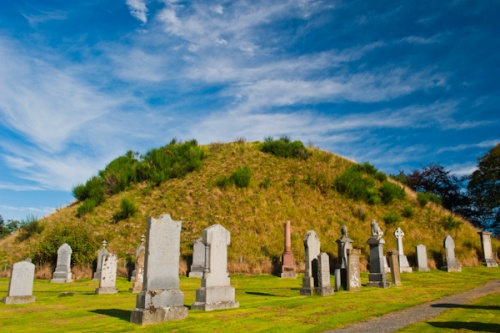 Inverurie Bass
Inverurie Bass is a 12th-century motte and bailey castle, rather oddly set within a later burial ground, one of the few Norman style mottes in northeastern Scotland. David, Earl of Huntingdon, was a powerful Norman noble and heir to the Scottish throne.

Sometime in the 1170s, as part of an attempt to exert his control over the Strathdon region, David built a motte and bailey fortress beside the confluence of the Don and the Urie, at Inverurie.

The high, conical mound that now stands within the church graveyard may have been that 12th-century fortress.

Note the use of the term 'may', for historians disagree as to whether the Bass is David's motte or a natural feature. Personally, having visited it, I can't see how it could be a natural feature, so I lean towards the castle side of the argument!

Though the Bass was smoothed down somewhat in the Victorian period, it still stands roughly 15 metres high. A stone's through away is the Little Bass, which as you might guess, is a smaller mound, possibly used to stable horses. 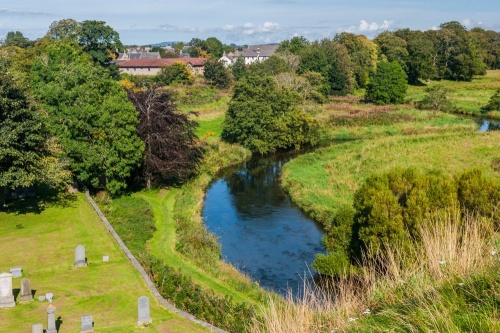 The view from atop Inverurie Bass

The Bass was originally surmounted by a wooden palisade. Though many such mottes were later rebuilt in stone, that never happened at Inverurie.

The Bass did have its moment in the spotlight of history in 1306 when Robert the Bruce rested here over Christmas. From Inverurie, he rode out to defeat his great rivals, the Comyns, at the Battle of Barra in 1307. His victory was one of the turning points in the Scottish battle for independence that culminated at Bannockburn seven years later.

A short distance upriver from the Bass is a small cave, said to be where Robert was inspired by a persistent spider to try one more time. Of course, the story of Bruce and the spider is probably apocryphal, so I wouldn't put too much faith in the legend! 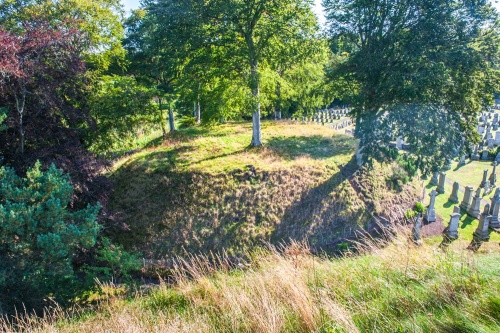 Bruce habitually destroyed castles that might be used against him by his enemies, and since we do not hear of Inverurie Bass playing any further part in history it is at least reasonable to suppose that the victorious King may have destroyed the Bass.

Immediately west of the Bass, among the modern gravestones, is a collection of 4 Pictish carved stones, with an information panel explaining their history. Though some of the carvings are quite worn, others are still very crisp and clear.

There is limited parking beside the burial ground, and it isn't obviously signposted, but the motte is so striking that you really can't miss it.

More self catering near Inverurie Bass >>