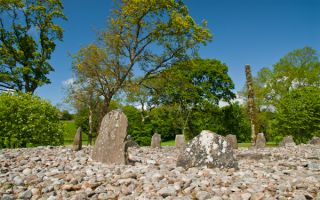 Temple Wood Stone Circles
There are two stone circles at Temple Wood, dating to at least 3000 BCE. One unusual (though not unique) feature at Temple Wood is that the circle interiors are filled with a low mound of stones. One theory is that the infill was a way of 'decommissioning' the circle and negating its power.
The remains at Temple Wood cover a long period of time. Let us see if we can trace the development of the site:

The north circle was built sometime prior to 3000 BCE and was then replaced by the second, southern circle. During the ensuing centuries, the northern circle was covered with the peat that gradually built up on the floor of the glen, so that no trace of it remained. It was only when the southern circle was excavated that archaeologists realized they were standing on a second circle.

The first development at Temple Wood was a timber structure on the site of the northern circle. The structure had two sets of two large posts aligned with each other on a north-south axis. The timber posts were then replaced by upright stones, but it seems the circle was left unfinished and a new, larger circle begun to the south. The central stone of the north circle suggests an alignment with the movements of the sun, and the northernmost stone in the circle is carved with a spiral, suggesting sun worship. 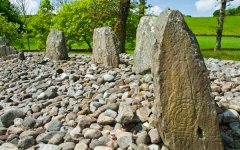 The south circle
(note the spiral carvings on the
nearest stone)
Around 2000 BCE small burial cairns were created outside the south circle. These cairns had central stone cists and were flat topped. The south western cairn contained a child's body, while a cairn to the north east had an adult skeleton with flints and beaker sherds.

Around 1700 BCE the standing stones of the south circle were joined by interval slabs, suggesting that access to the interior of the circle was intentionally restricted or cut off. At the same time, an outer raised bank supported by small stones was added. A second spiral was added to the northernmost stone, perhaps because the earlier spiral was partially obscured by the new bank.

The peat then moved in and gradually covered much of the site. Some of the stones were taken away during the medieval period. During the 19th century, a layer of fieldstones was dumped within the circle, partially obscuring the earlier remains.

The remains at Temple Wood are only a small part of the extraordinary array of prehistoric monuments in Kilmartin Glen. A short stroll away in the direction of Kilmartin village are the burial mounds of Nether Largie, while to the south are a series of standing stones at Lady Glassary Wood. 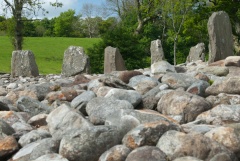 The south circle from the centre 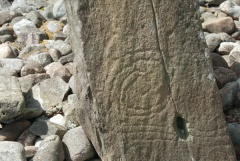 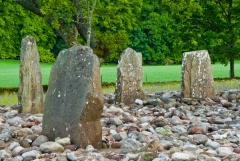 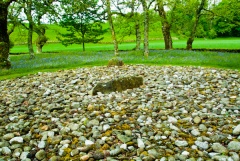 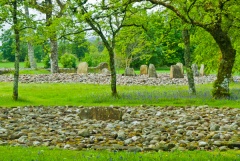 Looking from the north to the south circle 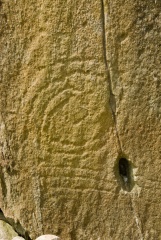 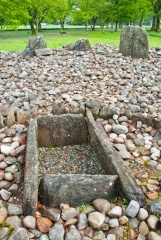 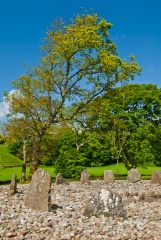 The south circle in sunshine!

Nearby accommodation is calculated 'as the crow flies' from Temple Wood Stone Circles. 'Nearest' may involve a long drive up and down glens or, if you are near the coast, may include a ferry ride! Please check the property map to make sure the location is right for you. 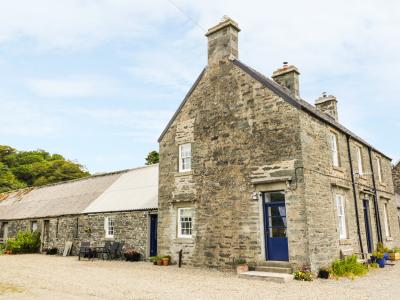