HERITAGE HIGHLIGHTS:   Cup and ring carvings on the central stone 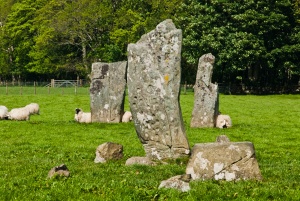 In a farm field just south of Kilmartin village is a grouping of 5 large standing stones. The stones are arranged to form a letter X, and are located along the line of the famous linear cemetery of burial cairns that run down the floor of the glen. The stones are between the southernmost cairn of the three Nether Largie cairns and the Ri Cruin cairn at the southern tip of the linear cemetery.

There are obvious cupmarks on several of the stones, but it is the central stone that is most heavily decorated with carvings, with very clear cup and ringmarks. This central stone is almost 3 metres high (about 9 feet) and is surrounded by a number of smaller stones like satellites orbiting a planet. There are other, isolated standing stones nearby; one about 100 metres northwest, another 300 metres to the west.

The arrangement of stones creates more questions than it answers. Is it meant to be an X, or cross? The arrangement is sometimes called a stone row, though in this case, each row is only two stones long, so I would question that interpretation, but of course, there may have been other stones which have not survived.

The easiest way to reach the stones is from the signed car park at Lady Glassary Wood, just off the A819. Due to the location near the car park the stones are sometimes known as the Lady Glassary Standing Stones.

From there a path leads across the B8025 into the field, heading for Templewood stone circle and the Nether Largie group of cairns. The stones are obvious ahead of you in the field. Good footwear is advisable, and do watch where you step, as sheep are usually in the field. 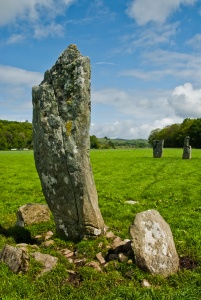 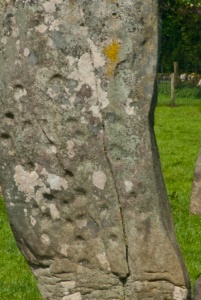 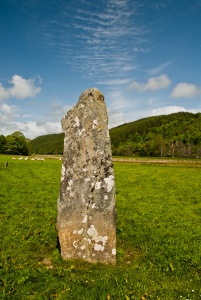 Nearby accommodation is calculated 'as the crow flies' from Nether Largie Standing Stones. 'Nearest' may involve a long drive up and down glens or, if you are near the coast, may include a ferry ride! Please check the property map to make sure the location is right for you.

Self Catering near Kilmartin