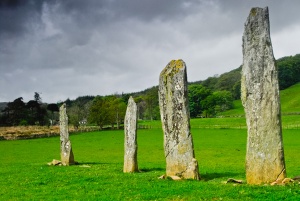 The floor of Kilmartin Glen is astonishingly rich in prehistoric sites. Just south of the Dunchraigraig Cairn (Historic Scotland) is Ballymeanoch, a complex of ancient monuments, the most obvious being a parallel row of standing stones.

There are four stones in one row and two in the other. A third stone, known as The Holed Stone, lies near the remains of a kerb cairn to the north east of the stone row, This recumbent stone has a hole through it, almost certainly man-made, and was recorded as being upright in the 19th century.

As for the stone row, the line of four stones is graduated, from 2.75 metres to 4.1 metres. The middle two stones are covered with cup and ring marks; the largest has over 70 cup marks and over a dozen cup and rings. 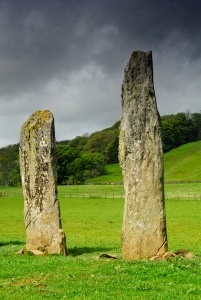 The two stone alignment is smaller than the four-stone row; the stones measuring 2.75 metres and 3 metres tall.

Most historians consider that the six stones still standing were just part of a much larger parallel row of standing stones, an avenue, if you will, similar to the celebrated Avenue at Avebury, in Wiltshire. These stones were probably erected about 2000 BC.

About 130 metres south of the stones is an almost destroyed henge monument. The henge was investigated in the 19th century but has since been almost obliterated by ploughing, so there's not much to see today.

Probably the easiest way to reach the stone row and kerb cairn is to park in the Dunchraigraig Cairn parking area on the A819 (southbound) and walk across the road for the cairn. From there, simply head south across the fields, where the stone rows are clearly visible. 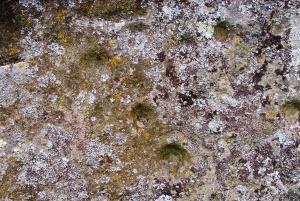 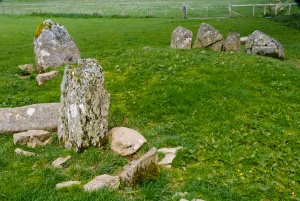 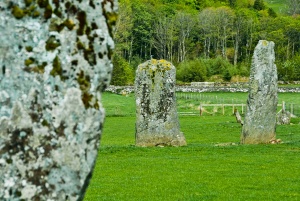 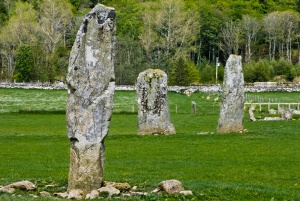 Nearby accommodation is calculated 'as the crow flies' from Ballymeanoch Stone Row. 'Nearest' may involve a long drive up and down glens or, if you are near the coast, may include a ferry ride! Please check the property map to make sure the location is right for you.

More self catering near Ballymeanoch

More bed and breakfasts near Ballymeanoch