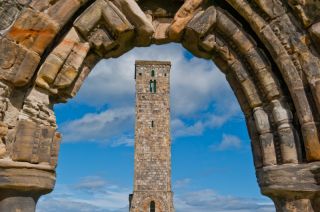 The remains of Scotland's largest cathedral, established in 1160, include 16th-century precept walls, 12th and 13th-century gables and south wall. St Rule's Tower - in the cathedral grounds - is part of the first Augustinian church. In the grounds is a museum with a collection of early Christian and medieval monuments and relics.
History
The story of St Andrew's revolves around the story of the Apostle Andrew. According to one version of the story, a monk named Regulus was inspired by an angel to steal the relics of St Andrew and set sail to the island of Thule. He landed instead on this promontory on the coast of Fife and there founded a settlement. The saint's relics became a focal point, not only of religious pilgrimage but also a symbol of Scottish independence from England. Andrew's symbol, the saltire cross, became forever associated with an independent Scotland, and eventually was chosen for the Scottish flag.

The medieval cathedral whose ruins we see today was begun around 1160 and was complete by the late 14th century. The church was huge, measuring 355 feet from end to end, with a central tower and spire. 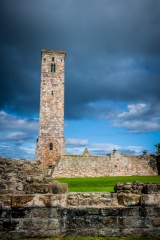 Storm clouds over
St Rule's Tower
For many years the Archbishops of York exercised the right to name the Bishop of St Andrews. Sometime around the turn of the 13th century, the Scots wrenched that right for themselves, and St Andrews was the most important see in Scotland. The area was a battleground during Robert Bruce's Wars of Independence. In 1318 Bruce himself was present at a service of consecration here, attended by all the bishops and most powerful nobles of Scotland. The Bishops of St Andrews were never 'just' religious figures, but exercised an influence that went far beyond purely spiritual matters. In 1418 Bishop Wardlaw founded a university at St Andrews the oldest Scottish university and still in existence. Then in 1472 St Andrews was declared a fully independent archbishopric.

What happened?
Unlike so many other places in Scotland, the destruction of the once-proud cathedral cannot be blamed o the English. Rather, St Andrews was caught up in the destructive turmoil of the Reformation. Part of this was the fault of the powerful Beatons, archbishops and sworn enemies of early reformers. James Beaton was archbishop of both Glasgow and St Andrews, and acted as Regent during the minority of James V. James Beaton was disliked, but his nephew, David Beaton, who followed him as Archbishop, was hated. 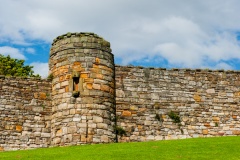 The cathedral precinct wall
Cardinal Beaton persecuted the reformers George Wishart, Walter Myln, and Patrick Hamilton in a show trial inside the cathedral. The three reformers were found guilty - a foregone conclusion - and burned in the archbishop's castle (you can still see a plaque on the spot of Wishart's death in the roadway just outside the castle). Reaction to the executions was swift and violent; Cardinal Beaton was murdered within his own castle, in front of his friends and his mistress.

Then in 1556, John Knox preached a series of sermons in Perth on the theme of 'Cleansing the Temple'. On 11 June he preached in the cathedral itself, then followed this with further orations on 12-14 June. The fervour of Knox's followers and the anti-episcopal feeling aroused by the Beatons turned to violence, and the cathedral was ransacked, as were all the city churches and Blackfriars and Greyfriars monasteries. Though not too much of the cathedral was actually torn down, in the aftermath of the Reformation it was simply no longer relevant as a place of worship and was allowed to fall into decay.

What to See:
Today's modern visitors to St Andrews Cathedral see only a shadow of its former glory. Roofless walls are open to the sky, and a few lonely towers still stand to mark what was for centuries Scotland's greatest cathedral. 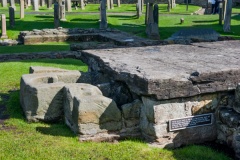 A medieval grave slab
The best remaining features are the west door, a section of the south aisle wall, south transept, and east wall, and a single tower of the west front. In addition, there are partial remains of the Augustinian monastery attached to the cathedral.

The cathedral stands within a huge perimeter wall that is almost a mile in length. Within the walls are the cathedral are the cathedral ruins, and the lonely tower of St Regulus's (St Rule) church, built about 1120 by masons from Yorkshire. The 12th-century east front still has its corner turrets, looking rather sad and lonely. The east front has a large window with stubby sections of tracery inserted in the 15th century. The west front, built from 1273-1279) has a single turret supported by a flying buttress and a worn central doorway. Sections of the chapter house still stand, with a lovely bit of blind arcading.

The Museum and Tower
In the grounds is a modern museum with finds from the cathedral site and displays on the rich and often tumultuous history of St Andrews. You can purchase a token from the visitor centre that will allow you to climb to the top of St Rule's Tower. The views are quite spectacular, looking out to sea and across to the ruins of St Andrew's Castle. 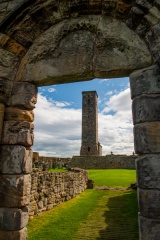 Medieval doorway and
St Rule's Tower
Just outside the cathedral precinct, on the edge of the cliffs, is the ruined church of Kirkheugh, the first collegiate church established in Scotland. The ruins are little more than foundations laid out on the turf, but can be viewed at any time - though by far the best place to see the ruins is from the top of St Rule's Tower!

Old Tom Morris memorial
Within the cathedral precinct, there are numerous memorials, some dating back to the late medieval period. One more modern memorial will be of interest to the throngs of avid golfers who flock to St Andrews each year. This is the tomb of Thomas 'Old Tom' Morris ()1821-1908, a pioneer of professional golf. Morris served for many years as groundskeeper and pro at the Old Course in St Andrews and is regarded as the father of modern greenskeeping theory and practice. 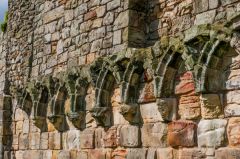 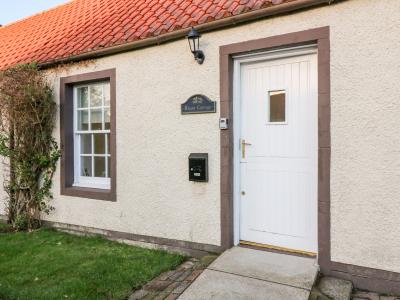 This semi-detached cottage rests in Peat Inn near Ceres, Fife and can sleep four people in two two bedrooms.
Sleeps 4 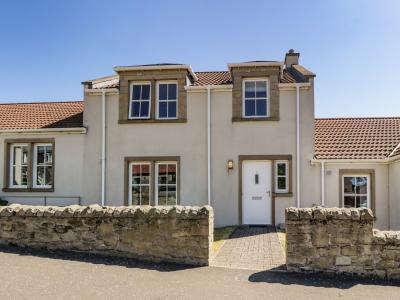 This delightful three-bedroom cottage rests in Strathkinness near St Andrews, Fife and can sleep six people in three bedrooms.
Sleeps 6