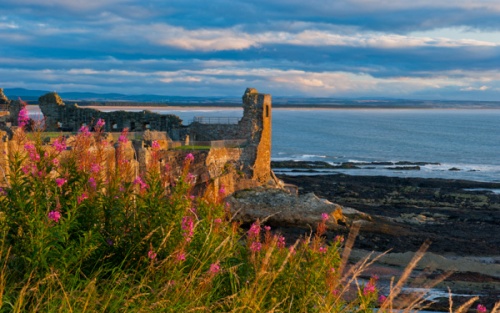 One of the most historic and scenically beautiful castles in Scotland, St Andrews Castle stands on a high clifftop site that was first fortified around 1100. Defended by sheer cliffs on the seaward side, and by rock-cut ditches to the landward, St Andrews was an easily defended site.

Around 1200 Bishop Roger of St Andrews, son of the Earl of Leicester, had a stone castle built to act as his official residence. Vestiges of the early 13th-century stonework can be seen in the Fore Tower, and the square keep.

It would be a mistake to think of the Bishop in terms of his religious power; churchmen in Scotland were far more than spiritual leaders; they were often major players on the political stage, and frequently acted as military leaders too.

During the Scottish Wars of Independence, the castle changed hands several times as first English the Scottish forces had the upper hand. Edward I held St Andrews after his triumph at Berwick, but the Scots retook it after the Battle of Bannockburn in 1314. 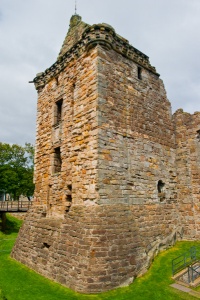 Rather than risk the English using it again, Moray slighted the castle. But the importance of St Andrews as a religious and political centre meant that the castle was not left to decay. Before the end of the 14th century, Bishop Walter Trail had the entire complex of buildings rebuilt, and it is largely his work that we see today.

St Andrews saw its fair share of important visitors. James I was educated here; his instructor was Bishop Henry Wardlaw, who went on to found St Andrews University. In 1445 James III was born in the castle.

St Andrews also served as a fairly notorious gaol. Prisoners were simply dropped into a 24-foot deep bottle dungeon, cut from the solid rock below the north-west tower. There, in an airless chamber, they could be ignored or forgotten.

Among the more famous prisoners was Archbishop Patrick Graham of St Andrews, who in 1478 was found to be insane, and was imprisoned in his own castle dungeon. In later years the dungeon was used to hold religious reformers, and John Knox was moved to write that 'Many of God's Children were imprisoned here'. Knox himself would have a close relationship with St Andrews Castle, but we'll come to that in a moment.

After the Battle of Flodden in 1513 Archbishop James Beaton built two huge gun towers, or blockhouses, and added gun emplacements for cannon, turning a medieval castle into an up-to-date fortress based on artillery.

The clash of new Protestant ideas and the traditional Catholic religion was not a peaceful one in Scotland. The hierarchy of the established Catholic church was determined to stamp out the Protestant Reformation by any means necessary.

In March 1546 a Lutheran preacher named George Wishart was imprisoned in the Sea Tower, and then burned at the stake in front of St Andrews Castle, a spot now marked by a simple design of paving bricks spelling out his initials. When I visited, a car was parked partly over the memorial bricks, the driver oblivious that they were parking on the spot where a man died in flames.

Wishart's execution was ordered and witnessed by the powerful Archbishop of St Andrews, Cardinal David Beaton, nephew of the earlier Archbishop James Beaton. But Cardinal Beaton's triumph was shortlived.

A band of Wishart's supporters, prominent local lairds, snuck into the castle dressed as stonemasons. They took the castle garrison by complete surprise, murdered Archbishop Beaton, and hung his naked body from a window high in the castle tower. They then occupied the castle and proceeded to form the first Protestant congregation in the country. Together they hoped to hold the castle against troops led by the Regent, the Earl of Arran. 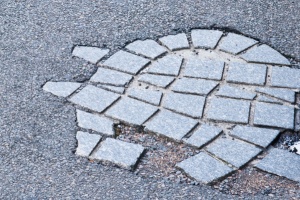 The occupation of St Andrews Castle and the killing of the Archbishop acted as a clarion call to Protestant reformers, who flocked to St Andrews. Among the reformers who came to support the Protestant uprising was John Knox, who was allowed to enter the castle under a temporary truce, and act as a preacher to the occupiers.

What followed was one of the most bloody and bitter sieges in Scotland's history. The besieging forces could not breach the defences so they decided to dig a mine through the solid rock, under the gate tower, so that it would collapse.

The defenders dug a counter-mine, hoping to intercept the attackers' tunnel. They were guided in their efforts solely by the sound of the attackers' digging, so they made three false starts before they oriented their counter-mine correctly.

You can tell a lot about the situation by the fact that the attackers' mine is wide, well-carved, and easy to navigate, while the counter-mine is narrow, winding, and roughly carved. The defenders were in a desperate race against time to intercept their enemies' mine, and they knew it! Today you can walk - or waddle like a duck in low places - up the length of the countermine.

The end of the siege came when a French fleet arrived off St Andrews. The French bombarded the castle, and additional cannon were set up at St Salvator's College and the Cathedral priory towers. Not surprisingly, the defenders were forced to surrender. Most were sent to work on French galleys as oarsmen. As for the mines, they were forgotten to history until 1879, when cellars were being dug for a nearby house.

The castle passed to Archbishop John Hamilton, the illegitimate brother of the Earl of Arran. Hamilton rebuilt much of the castle before he was executed for his role in the murder of Lord Darnley, Mary, Queen of Scots second husband. From 1560, after the eventual triumph of the reformers, the castle was used as a gaol for political prisoners. At that time a political prisoner could simply mean someone who held to a different faith! 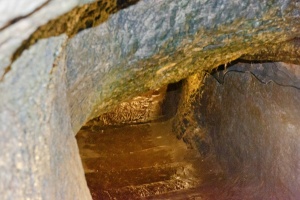 In 1606 the castle passed from the church into secular ownership under the Earl of Dunbar. The church did once again regain control, but after William and Mary came to the English throne in 1689 the office of bishop was abolished. The castle was permanently severed from church control and fell into gradual ruin.

Ownership at length passed to the burgh council - the local civic government. The council was not terribly concerned with preserving heritage, and in 1656 used stone from the castle to rebuild and extend the harbour pier.

Today St Andrews Castle is in the care of Historic Scotland. There is a modern visitor centre and displays on the history of the site. Families will enjoy visiting; children, in particular, will enjoy exploring the counter-mine. It is a bit slippery in places but perfectly safe.

Our daughter enjoyed the mine tunnel and climbing up the tower. And the castle is only a short walk along the cliff-tops to the ruins of St Andrews Cathedral, another must-see historic site. I loved the castle and St Andrews as a whole, and I highly recommend a visit. 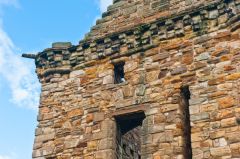 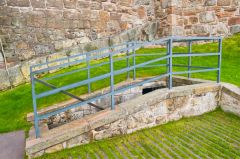 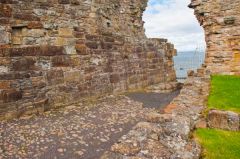 Self Catering near St Andrews