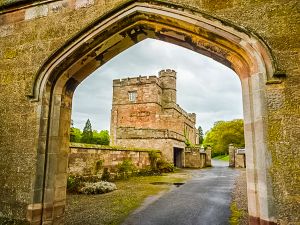 Biel House
Biel is an 18th-century mansion incorporating a 14th-century tower house. The house was remodelled in Gothic style in the 19th century and is surrounded by terraced gardens.

The history of Biel House is lost in the mist of time. The earliest dwelling seems to have been a fortified tower house erected in the 14th century. The Biel estates were held by the Dunbar family, formerly Earls of March, until 1489.

In that year Robert Lauder purchased the estate, which became a feudal barony. The Lauders were a tumultuous family; Robert Lauder of The Bass once imprisoned his son James in Biel Tower after they disagreed over religion. James Lauder was murdered by his cousin in Biel Tower in 1580.

The last Lauder at Biel was George, who sold the property to John Hamilton of Bromehill, the 1st Lord Bellhaven, in 1647. Hamilton laid out the terraced gardens that lead down to Biel Water. These 17th-century terraced gardens were unusual for Scotland at the time and set the style for stately homes around the country to copy.

In 1814 William Atkinson extended the house, and it was enlarged again in the early 20th century to create a romantic Tudor Gothic style country house.

Within the extensive grounds are a listed doocot, a summerhouse, and glasshouses. The parkland and gardens include a rock garden, kitchen garden, ancient deer park, and a large area of woodland with trails leading through it. The woodland is laid out along Biel Water, which runs through the entire estate and used to feed Biel Mill.

The house at Biel is privately owned, and is only open by appointment to visitors.

More self catering near Biel House >>