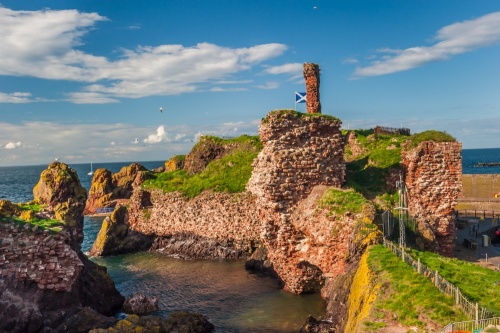 Dunbar Castle in Lothian was once one of the most impressive and imposing castles in Scotland. The castle ruins still dominate the approach to Dunbar harbour.

The importance of Dunbar was realised as early as the Iron Age. The name 'Dunbar' comes from the Brythonic words 'dyn barr', which translates as 'the fort of the point'. This suggests that the fort came first, followed by the settlement we now know as Dunbar. The fortification on the point of land defending Dunbar harbour was used by the Anglian kingdom of Bernicia as early as the 7th century.

In AD 678 St Wilfrid, Bishop of Northumbria, was briefly held prisoner at Dunbar Castle. The 9th-century Pictish king Kenneth MacAlpin took possession of the castle, or, according to some accounts, attacked and burned it. That early castle would have been built of timber and earthworks.

When William the Conqueror seized the English throne in 1066 the north of the country rose in revolt. William responded with the ferocious Harrying of the North, leaving vast swaths of territory destroyed. Leading nobles were forced to flee abroad or north to Scotland. Among those nobles was Gospatric, Earl of Northumbria.

Gospatric took refuge with Malcolm III of Scotland. Malcolm accepted Gospatric as a vassal and gave him estates in southern Scotland, including Dunbar. He also named Gospatric the 1st Earl of Dunbar. It was Gospatric who erected the first stone fortifications at Dunbar Castle, replacing the older timber and earthworks. 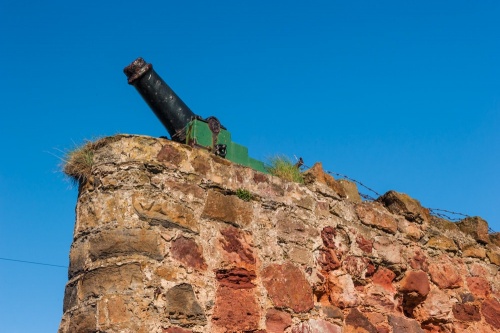 Remains of the 19th-century artillery battery

Gospatric's descendants held Dunbar Castle until the late 13th century. Edward I captured the castle in 1297. His son Edward II took shelter at the castle following his ignominious defeat at the Battle of Bannockburn in 1314.

The castle was regained by the Scots but in 1338 the English attacked again. Dunbar was defended by Agness, Countess of Douglas, known as Black Agnes. She and her troops held out for 6 weeks and forced the English to withdraw.

The Douglas family were frequently in and out of favour, and when the 11th Earl of Dunbar was found guilty of treason the castle was slighted to make it militarily unusable. James IV later had it rebuilt. 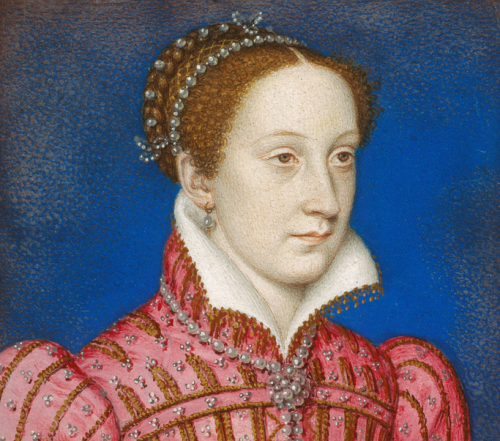 Dunbar Castle is closely linked to two major events in the tumultuous life of Scotland's most famous queen. In 1566 Mary came here with her second husband, Lord Henry Darnley, just two days after the murder of Mary's secretary David Rizzio - a murder in which Darnley himself was heavily involved.

Darnley had quickly begged Mary's forgiveness for his involvement in the murder, then, fearing for his safety after betraying his fellow conspirators, rode ahead to Dunbar Castle. Mary was heavily pregnant at the time with Darnley's child, the future James VI of Scotland but he showed no concern for her welfare, only for his own skin. At Dunbar Castle, Mary was able to rally support, and within a week she returned in force to Edinburgh, forcing the conspirators to flee to England.

She returned to Dunbar later in 1566 on a royal progress.

Darnley was murdered the following year, possibly with Mary's knowledge. Her favourite, James Hepburn, 4th Earl of Bothwell, was the keeper of Dunbar Castle. He abducted the queen and brought her to Dunbar, ostensibly for her own safety.

One rumour suggests that at Dunbar he raped the queen, forcing her to marry him to protect her honour. Another version of events says that the couple put forward the story of rape to legitimise an affair with a man said to be behind her husband's murder.

What we do know for certain is that the couple controversially married shortly afterwards.

After Mary was forced to abdicate the throne and flee to England Dunbar Castle surrendered to her enemies. The defences were destroyed once again and the once-proud castle was dismantled.

Most of the ruins were pulled down in 1844 and used to create the harbour we see today. The Victorian harbour had its own artillery battery, parts of which remain. The artillery emplacement changed the shape of the harbour and boats now pass directly through the former castle site. Only a few fragmentary masonry walls survive along with remnants of vaulted chambers.

In 1993 part of the castle ruins collapsed into the sea. The castle was then closed to the public due to safety concerns. The ruins cannot be explored but you can easily see them from several vantage points around the harbour.

Access is very easy. The castle is located at Victoria Harbour, off Victoria Place and Castle Gate, reached via Victoria Street off the High Street in Dunbar. There is a free parking area at the leisure centre on Victoria Street.

More self catering near Dunbar Castle

Self Catering near Dunbar