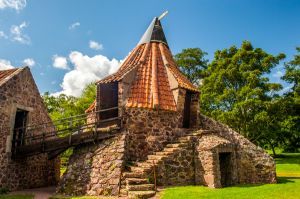 Preston Mill is an unusual and eye-catching 18th-century mill with a conical kiln and red pantile roof that looks like a combination of an oast house and a wizard's hat. A short walk away is the Phantassie Doocot, a restored 16th-century dovecot.
History
There has been a mill on the banks of the River Tyne at at East Linton since at least 1599 and possibly earlier, but the present mill dates almost entirely from the 18th century. Though the mill buildings are original, the mill wheel and much of the actually milling machinery are modern. The mill remained in use until 1959, and has since been restored to working order, although it no longer grinds grain for sale.

Admission is by guided tour only, and the tours last approximately 40 minutes. Beside the mill is a visitor centre with an exhibition telling the history of the mill and how the miller lived and worked.

The first mill here was a simple single storey building, built of wood and stone, under a thatched roof. The mill served tenants of the East Linton estate, who were required under law to grind their grain here. In return, the miller took a percentage of the grain as payment in kind.

This ancient system was called 'thirlage', and remained in force until about 1800, when the mill was operated as an independent business. The miller lived near the mill in a smallholding, keeping animals, growing vegetables, and catching fish and birds to supplement the family diet. 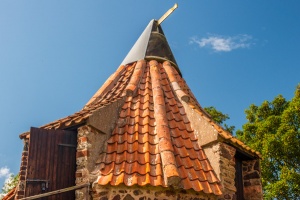 The drying kiln roof
In 1835 Preston Mill was one of 7 water-mills in Prestonkirk parish. There were two main buildings; the mill itself and the peculiar kiln beside it. Because of the risk of fire, drying kilns were usually kept separate from the actual mill building.

The unusual design of the polygonal kiln has no parallel in Scotland and looks more similar to traditional Dutch mills of the period, and with hop kilns in Kent. The ground floor had a fire which heated and dried grain spread out on a perforated floor above. The first floor was accessed only by an external stone stair.

The mill is on two levels, with grinding stones and hoppers above and a fanning mechanism below to remove husks. The machinery was powered by an undershot wheel with wooden gears and cogs. The flow of water is controlled by a sluice gate inside the mill.

Phantasie Doocot
A short 1km stroll away from the Mill past farm fields leads you to the Phantassie Doocot, built in the 16th century to house 500 birds.The doocot is built in a beehive shape, which is not unusual, but what is unusual is the peculiar parapet, shaped like a horseshoe. Access to the nesting boxes is provided by a wooden ladder fixed to a cross-beam spanning the doocot interior.

The doocot walls are 4 feet thick, and provide 544 nesting boxes. The odd little building is 56 feet around, and has 16 entrance holes. The doocot was gifted to the National Trust for Scotland in 1961, and since it was so close to Preston Mill both properties are linked under the same operations team for the NTS.

Nearby Phantassie Farm was the birthplace of engineer John Rennie.

Visiting
Admission to the mill is by timed tour, so we had to wait for our tour time, but that gave us an opportunity to photograph the exterior of this wonderfully eccentric building. According to our tour guide Preston Mill is one of the most frequently photographed buildings in Scotland, and I believe it. One of the fascinating features our guide showed us was a flood marker on the exterior wall of the mill, showing the height of floods at different periods in the mill's history. The highest mark was about as tall as I am!

More self catering near Preston Mill and Phantassie Doocot >>

More bed and breakfasts near Preston Mill and Phantassie Doocot >> A detached cottage situated within the village of East Linton that boasts three bedrooms and can sleep up to five people.
Sleeps 5