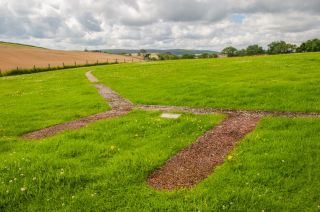 Doon Hill is a fascinating site, the location of two timber halls, the first the home of a 6th-century British chief, and the second a 7th-century Anglo-Saxon hall. There were two main phases of occupation, but the hilltop was in use before the first occupation. A small burial ground that predates the first human occupation was found during excavation.
Sometime in the last half of the 6th century a British chief erected a timber hall dwelling on Doon Hill. This first dwelling was about 23 metres long and was divided into 3 rooms. It probably lasted about 100 years, until it was destroyed by fire during an Anglo-Saxon incursion from Northumberland. A second wooden hall was then built within the first, consisting of two chambers with an annexe at one end.

The second hall is similar in style to the site at Yeavering, Northumberland, which has been linked to the Northumbrian king, Oswald. So it is certainly possible that the second Doon Hill hall was built for an Anglo-Saxon lord as part of Nortumbrian attempts to settle Lothian. It is possible that the hall was only in use for a short time before the Anglian lord rebuilt on the coastal plain below the hill.

Though the actual physical remains at Doon Hill are limited, due to the fact that the halls were built of timber, the site is of great historic significance, for it is one of the very few sites we have that tell us how Dark Age people lived, and what sort of structures they built.

The site is well signposted off the A1, north of Torness power station (marked as 'hall' on OS maps). A short distance off the A1 a narrows lane leads to a gated track. If the weather is wet you may want to park here and climb the 1/4 mile uphill to the site. Otherwise, open the gate and continue uphill to a signed parking area opposite Doon Hill. There is a very useful information board outlining the history of the site and its significance.

Visiting Doon Hill
It is hard to know what to make of Doon Hill. It is a fascinating site, even though there's not really a whole lot to see! There are no 'remains' to examine, just the lines of foundation walls laid out on the green grass. Though the walls were originally laid out with different coloured stone to indicate the different phases of building, much of the colour has faded away, and you are left scratching your head a bit trying to figure out which bits came when.

More self catering near Doonhill Homestead >>

A semi-detached property in the town of Dunbar in Scotland, it can sleep six people in three bedrooms.
Sleeps 6 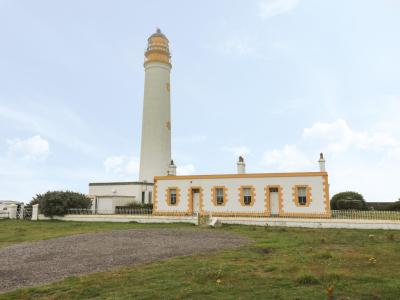