HERITAGE HIGHLIGHTS:   One of only 3 traditional meal mills in Scotland still in working order 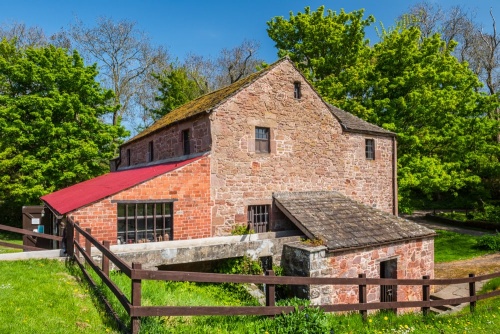 Barry Mill
Barry Mill is a 19th-century water-powered meal mill, rebuilt in 1814 after a fire. The original milling machinery has been restored to working order.

There has been a mill here beside Barry Burn since at least 1539 when a pair of mills were owned by Balmerino Abbey. Nether Mill ground corn, while Over Mill ground oats. The abbey's property was seized by the crown at the Reformation, and in 1605 James VI granted the mills to James Elphinstone, 1st Lord Balmerino.

The Nether Mill eventually ceased operation and the building is now used for storage. The Over Mill was then referred to simply as Barry Mill, in which guise it continued grinding meal until the late 20th century.

From a dam half a mile upstream a lade, or chute, feeds water to the mill wheel, which measures 15'6" across. The water comes in at the top of the wheel, meaning it is an 'overshot' design. The turning wheel powers a system of gears, pulleys, and shafts which in turn bring power to the sack hoist, the millstones, and a fan used to separate the grain from the chaff.

The mill continued in operation until 1982, and was the last working meal mill in Angus, though in its last few years it produced only animal feed. Grain was brought here in jute bags from local farms, hoisted to the top of the mill by a water-powered sack hoist, then fed through hoppers to a pair of French burr millstones produced in Edinburgh around 1880.

The grain elevator is the youngest part of the building; it was built in 1910. The mill is arranged on three floors, with a bin floor at the top, a milling floor at the second level, and a meal floor in the basement.

There are regular milling demonstrations (usually on Sundays) where you can see the original milling machinery in operation. There are also optional guided tours to learn more about the process of milling and the history of the mill. Tours take you through the entire process of turning grain into oatmeal, from storing, drying, and cleaning the grain, to sieving it and producing meal ready to be eaten.

Even when no milling is taking place you can still see the mill-wheel in operation.

The tours are not obligatory; you can simply choose to wander around and explore for yourself.

More self catering near Barry Mill >>