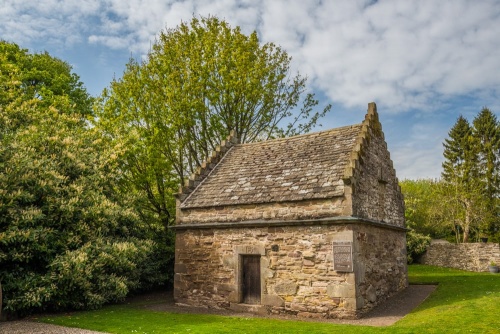 Tealing Dovecot
Two historic sites spanning thousands of years stand a short distance apart in Tealing. The first site is Tealing Dovecot, a well-built late 16th-century dovecot. The dovecot is a single storey structure, built to a rectangular plan, with stepped gables at either end. There is a 'DMHG' monogram over the door, referring to local landowner Sir David Maxwell and his wife, Helen.

A short walk from the dovecot brings you to an Iron Age earth house, or souterrain. The earth house consists of a long, curving underground passageway built with stones on which Bronze Age carvings can still be seen.

The passage is fully 80 feet long with several smaller chambers branching off. The structure dates to about 100 AD, and would originally have been covered with a thatched roof

The earth house was uncovered by a farmer in 1871, and subsequent excavations turned up bronze rings, stone cups, a bracelet, and a number of animal bones. Near the entrance to the earth house is a boulder with cup and ring marks which almost certainly pre-date the souterrain.

More self catering near Tealing Dovecot and Earth House >>

More bed and breakfasts near Tealing Dovecot and Earth House >>