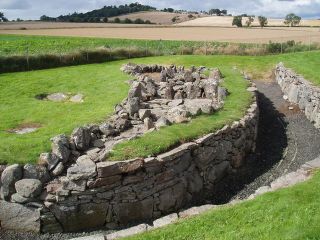 Ardestie Earth-House
Despite the name, Ardestie Earth-House is neither a house nor made of earth. It is, rather, a stone-built underground storage area, similar to the fogous of south west England.
The Earth-House was not meant as a dwelling but was likely used to store grain or other food supplies in a cool environment. There is a stone-lined drain built into the floor to keep the interior as dry as possible. When archaeologists investigated the site in the 1950s they discovered a series of round buildings at ground level. One of the small, circular buildings gave direct access to the earth house passage below.

The Ardestie site was probably built in the 1st or 2nd century AD. The dates suggest that they might have been made to store grain for the invading Roman armies. Most of the earth houses like Ardestie were filled in around 200 AD and were never used again. However, it does seem that the ground-level dwellings were used after the earth house was blocked up. One of the stones on the wall of a round house shows a cup and ring mark carving.

Was Ardestie built by the Roman army and then filled in when the army retreated south to Hadrian's Wall? That certainly is one possibility. What makes Ardestie so interesting is the range of above ground buildings, now only visible as low foundations.

There are several other earth houses in Perthshire and Angus in the care of Historic Scotland, including Culsh, Tealing, and Carlungie.