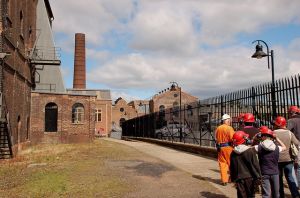 Scottish Mining Museum
The Scottish Mining Museum is set in a Victorian coal mine that retains much of its original mining machinery. This fascinating museum covers the history of mines and miners throughout Scottish history, with displays of equipment, archival material, old photographs, and objects associated with mining in Scotland through the centuries.

The Lady Victoria Colliery in Newtongrange was opened in 1890 by the Lothian Coal Company. It actually started production in 1894 and continued to be operated independently until 1947 when the National Coal Board was formed and coal production was nationalised. The colliery finally closed in 1981 only to reopen in 1984 as a museum dedicated to the story of mining in Scotland.

Why choose the Lady Victoria Colliery to house the new museum? The original Victorian buildings at Newtongrange survived almost completely intact, making the colliery an outstanding example of a Victorian mining complex.

Among the important examples of machinery on display are a winding engine and colliery headstocks.

The museum developed the former colliery offices to house new collections of over 60,000 artefacts, a library, and displays of archival material, machinery, old photographs, and objects that show how miners lived and worked, how the mine operated, and the history of mining across Scotland.

See safety helmets, lamps, geological samples, even tableaux of miner's at home, at work, and during their leisure time. There is a large library with reference material for research, including trade journals and catalogues, books and magazines.

One of the newest areas of the museum is the National Mining Memorial Centre, which occupies the original washer building. The Memorial Centre is a space for contemplation, offering visitors a chance to remember those connected with mining and learning about the dangers of mining and how people have worked over the years to control and reduce those dangers.