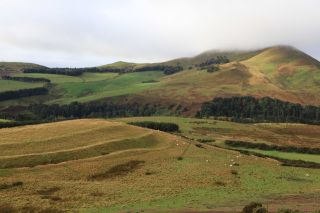 Set in the beautiful surroundings of the Pentland Hills, Castlelaw Hill Fort is an elaborate Iron Age fortification consisting of three earthwork ditches and banks protecting a roughly circular inner area.
Excavations during the 1930s showed that the banks defending the fort were made with an inner core of timber and clay, faced by stone.

The earthworks were originally topped by a timber palisade. One interesting feature is a souterrain or underground storage area, built into the side of one of the defensive ditches.

The site was built in the mid-1st millennium BC, and apparently defended a small community of farming families, with huts clustered inside a simple timber palisade. The timber walls were later replaced by the system of earthwork banks and ditches. Passage through the defences was through a strong timber gateway. Some time after the first ditch and bank another two layers of concentric earthworks were added.

The souterrain lies in the middle ditch. The storage area is composed of a long (20 metres) curving passage with a large chamber on one side. The souterrain dates to the 1st-2nd century AD, towards the end of the site's occupation. Though we call it a storage area, in truth no one knows what these underground passages and chambers were used for. Theories range from a hiding place, a ritual area, a workshop, or the most practical of suggestions; a cool, dry place to keep grain and dairy, making a souterrain the equivalent of an Iron Age refrigerator.

The hill fort is cared for by Historic Scotland and is free to enter at any time. Some care should be taken, however, for the site borders a military firing range, so please take care not to trespass on the clearly marked military range. The hill fort lies within the Pentland regional park, with good access to footpaths. The fort is located on Castle Knowe, 1 mile north west of Glencorse. 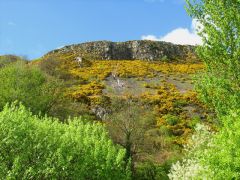 About Castlelaw Hill Fort
Address: Castlelaw, Lothian, Scotland
Attraction Type: Prehistoric Site
Location: South of Edinburgh off the A702, near the Pentland Hills Visitor Centre. There is a parking area at Castlelaw with footpaths up to the fort.
Website: Castlelaw Hill Fort
Historic Scotland
Location map
OS: NT229638
Photo Credit: Calum McRoberts, licensed for reuse under the Creative Commons Licence