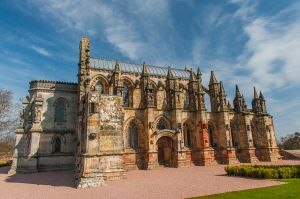 Also known as St Matthew's Collegiate Church, but more commonly simply called Rosslyn Chapel. The chapel was founded by Sir William St Clair, the last Prince of Orkney and lord of Rosslyn Castle in 1446. It was heavily damaged in 1592 and restored in 1861. The main feature of this extraordinary building is the intricate and elaborate carvings that seem to adorn every surface. There is simply no medieval building in Britain like Rosslyn.

The exterior is a bewildering myriad of flying buttresses, a heraldic roof cornice, and gloriously carved corbels, canopies, and niches.

In 1446 Sir William Sinclair (or St Clair), 1st Earl of Caithness, received a charter to build a collegiate chapel, served by canons and choristers whose job it was to say regular prayers for the Sinclair family. It seems likely that construction on the new chapel began in 1456 after accommodation for workmen had been built. The original plans probably called for a much larger building on a cruciform plan. These plans were cut short when Sir William died in 1484, and work ceased. Foundation walls suggest the layout of the original, much larger chapel, which would have rivalled a small cathedral in scale.

Only the choir was complete by the time of Sir William's death. Beneath the Lady Chapel at the east end of the building is the oldest part of the structure, the crypt, which may have formed part of an earlier castle. The chapel is supported on 14 pillars, with arcades on the north and south sides, and a Lady Chapel at the east end. Dividing the Lady Chapel from the body of the nave are 3 pillars, known today as the Master Pillar, the Journeyman Pillar, and the Apprentice Pillar. The names of the pillars relate to a famous story. 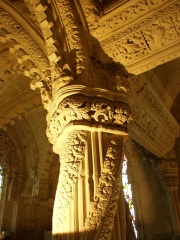 According to legend, the master mason was asked to create a pillar of such incredibly ornate design that he did not want to attempt it without seeing the original pillar in the Holy Land. He travelled to see the original for himself but was so long on his journey that his workmen feared he had been killed. An apprentice mason took on the task of sculpting the pillar, an astonishing, spiral shape ornamented with exquisite detail.

When the master mason returned from his journey he found the pillar complete, and not just complete but finished with a level of skill beyond his own. In a fit of jealousy, the master took up his hammer and dealt the apprentice a fatal blow. The master was executed for his crime, and his face was carved high on the west wall of the chapel, his gaze permanently fixed on the pillar carved by his victim.

It is a good story, but probably not true. The tale of the jealous master and the genius apprentice was first recorded in the Georgian period. It does, however, add to the wealth of mystery and legend that seem to cling to Rosslyn! The base of the Apprentice Pillar is carved with intertwined dragons, and the top of the pillar depicts foliage. The combination suggests some link to the Nordic legend of the Yggdrasil tree.

More recently Rosslyn has become famed for its link to various Grail legends and link to the Knights Templar, tales that gained more popularity after the success of the novel The Da Vinci Code. One legend that refuses to die is that the Chapel offers proof that a member of the St Clair family voyaged to North America long before Columbus.

One set of carvings is said to depict North American maize, which was unknown in Europe at the time the Chapel was built. The maize, if such it is, is used to support the idea that Henry Sinclair, Earl of Orkney (c.1345 – c.1400), made a voyage to Greenland and the Americas almost a century before Columbus set sail.

Another persistent legend revolves around the Sinclair family vault, which lies under the rear of the Chapel. The sealed vault is said to contain the Holy Grail, a Templar treasure, the original Crown Jewels of Scotland, or the mummified head of Jesus, depending on which version of the legends you prefer.

The Chapel has been linked to a variety of other esoteric legends, particularly with the Knights Templar and the origins of the Freemasons. The Chapel's layout is said to mirror the design of Solomon's Temple in Jerusalem. William Sinclair, 3rd Earl of Orkney, was said to be a hereditary Grand Master of the Scottish stonemasons, and several of his descendants served as Grand Master of the Grand Lodge of Scotland. 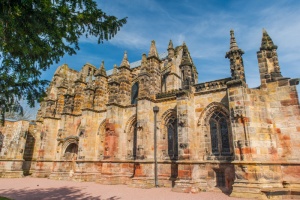 The south front of the chapel

The carvings are said to contain a multitude of Masonic and Templar symbols. It is also possible that many supposed Masonic carvings were in fact added in the 1860s by the 3rd Earl of Rosslyn, who hired David Bryce to undertake repairs. Bryce was a known Freemason and may have introduced Masonic carvings into the Chapel.

Numerous attempts have been made to find hidden meaning in the myriad of carving details. One prominent feature is 213 small cubes that project from pillars and arches. The cubes are carved with numerous different designs, which have been interpreted as a musical score, and as a secret code.

So, is Rosslyn Chapel a mysterious, esoteric centre of secret knowledge, or simply an amazingly ornate medieval chapel, built by a powerful nobleman who wanted to ensure the well-being of his family's souls forever?

In truth, we don't know, as so much of the Chapel's origins are hidden in the mists of time. What we can say, however, is that there is no building, large or small, to equal Rosslyn Chapel in all the British Isles. The exquisitely detailed carving, both inside and out, is without peer. To stand inside the Chapel is to stand in awe. The chapel is, without doubt, the most incredible historic building I've ever seen, and I've seen most of them!

Rosslyn Chapel is well signposted from nearby roads. There is a small parking area and a modern visitor centre with a cafe and an exhibition area. There is a small display building behind the Chapel where pieces of carved stone are on display.

I highly recommend sitting in on one of the regular introduction talks given by guides. It is a really good way to learn about the history of the chapel and the highlights to look for amidst the wealth of carving. There are very good information panels throughout, pointing out details in the carving that are hard to notice at first glance.

Unfortunately, the Chapel does not allow interior photography, so I can't share views of the incredibly ornate carvings. You'll just have to visit and see them for yourself! I can also recommend taking a short walk down the hill to the partially ruined and extremely picturesque Rosslyn Castle, which dates to the 14th century.

The photo of the Apprentice Pillar is republished with gratitude under a Creative Commons license (and was taken before interior photography was outlawed!). 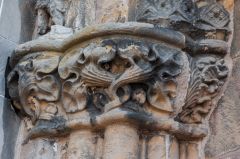 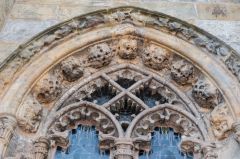 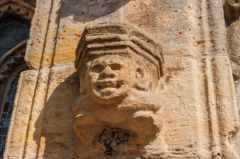 More self catering near Rosslyn Chapel >>