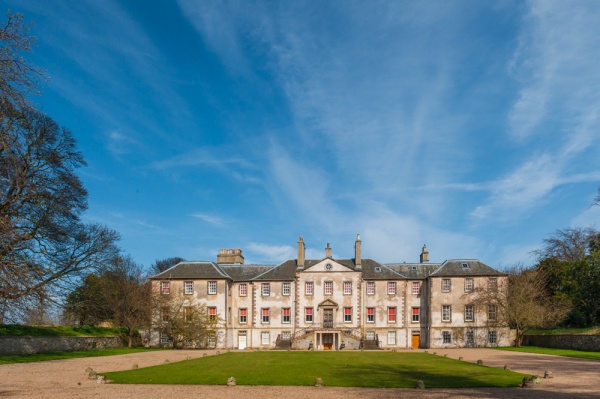 In 1686 a successful architect named James Smith designed a house for his family near Musselburgh, calling it Whitehill. Smith was one of the foremost architects in late 17th century Scotland, designing major buildings including Hamilton Palace and Dalkeith Palace. From 1683 he acted as Surveyor of the King's works, in essence the royal architect.

One of Smith's innovations at Whitehill was a secret passage giving access to a suite of private rooms on the first floor. 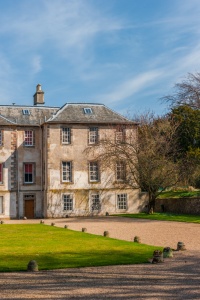 In 1701 Smith sold Whitehill to Lord Bellenden, who in turn sold it in 1709 to Sir David Dalrymple, a historian, legal writer, and an active figure in the Scottish Enlightenment. Dalrymple already owned an estate at Hailes in East Lothian, so he called his new property Newhailes.

His companion for part of his excursions in Italy was Lord Herbert, later the 8th Earl of Pembroke. Herbert, known to history as The architect Earl, was passionate about Palladian architecture, and designed the famous bridge at Wilton House in Wiltshire. Dalrymple was heavily influenced by Herbert and the architecture he saw in Padua and Venice, so when he inherited Newhailes he set about recreating it in Palladian style.

Around 1720 Dalrymple called upon fashionable architect William Adam to design a new hall and grand staircase as a centrepiece of the house. Adam did not alter the exterior of Newhailes, however. Sir James Dalrymple also began laying out the grounds of Newhailes as a rococo pleasure ground, decorated with architectural curiosities bought in Edinburgh and London. 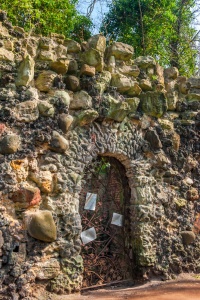 The shell grotto on
the woodland walk

From 1720 the Dalrymples laid out a pleasure garden and parkland surrounding the house, with the help of horticulturalist and garden designer John Hay. The gardens are now one of the last surviving early 18th century planned landscapes in Scotland. The basic garden layout remains intact, with a ha-ha and a raised terrace walk separating the house and grounds.

The landscape is a fascinating example of English landscape garden design with a Scottish flavour, with winding trails through woodland and fields dotted with neo-classical follies and monuments. Among the structures erected in the gardens were statues of gladiators (stolen in 1847), and an Obelisk, erected in 1746 in memory of Sir James's cousin John, 2nd Earl of Stair.

Woodland walks follow a small burn past a shell grotto to a ruined summerhouse, while close to the house an early 18th-century flower garden survives, protected by semi-circular walls.

Around 1750 the house was extended once more with the addition of symmetrical wings, one housing a huge double-height library. This was the domain of Sir David Dalrymple, the 3rd Baronet (1726-92), author of 'The Annals of Scottish History' and a man at the centre of an educated circle of scholars. Samuel Johnson called the library at Newhailes 'the most learned drawing room in Europe'. 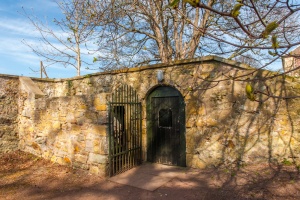 Entrance to the hidden servants' tunnel

The house is known for its elegant 18th-century interiors, with beautiful collections of fine furniture and artwork. Much of the original decoration remains, including colourful hand-painted wallpaper from China. In the White Bedroom you can see 18th-century Chinese silk bed hangings and costumes which were discovered locked in a trunk for storage.

Access to the house is by guided tour only. I found the tour to be extremely well done, with a very knowledgable and entertaining guide. Unfortunately, we were not allowed to take photos of the house interior. The artwork and furnishings are exceptional, and I found it refreshing that the National Trust for Scotland has chosen to portray Newhailes in a 'comfortable, lived-in' way, rather than as an antiseptic museum-piece.

Despite the wonderful Georgian interiors the part of the tour that I will always remember is the end, when the guide led us through a series of underground tunnels built so that servants could come and go about their tasks without being seen by the Dalrymple family. The tunnels lead under a raised bank on one side of the formal gardens in front of the house.

It is well worth your while to explore the gardens; the woodland walk along the burn is a delight, and seeing the shell grotto, obelisk and raised terrace walk really helped bring home the 18th-century Palladian world of the Dalrymples. 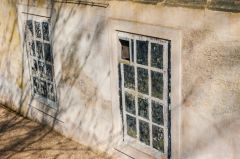 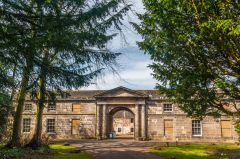 More self catering near Newhailes

More bed and breakfasts near Newhailes