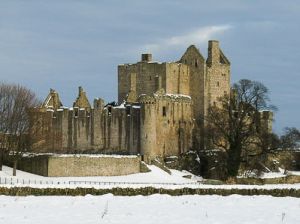 Craigmillar Castle
Craigmillar is an early 15th-century L-plan tower house, expanded in the 15th and 16th centuries. Known for its historical connections with Mary, Queen of Scots, Craigmillar stands amid extensive gardens.

Craigmillar was begun in the late 14th or early 15th century as a simple tower-house residence, one of the earliest tower houses in Scotland. The house was built for the Preston family, barons of Craigmillar. Over the next 250 years the castle was extended, remodelled, and rebuilt so many times that the original tower-house became lost amid a jumble of buildings that turned the medieval house into a comfortable residence.

In 1479 John Stewart, Earl of Mar, was made prisoner at Craigmillar. Stewart, the brother of King James III, was accused of using witchcraft against his brother. He died in what might best be termed suspicious circumstances, perhaps on the king's orders. The infant James V was brought here for safekeeping in 1517 when a plague broke out in Edinburgh.

Craigmillar was burned by English troops under the Earl of Hertford during the Wars of Rough Wooing in 1544. Sir Simon Preston repaired the damage and renovated the domestic apartments. Preston served as a member of the Privy Council to Mary, Queen of Scots, and was a staunch ally of the young queen.

Craigmillar is best known for its links to Mary, Queen of Scots. Mary became ill after the birth of her son, the future James VI, and came to Craigmillar to convalesce in 1566. Or, if you prefer a different version of the tale, she fled here in alarm after the murder of her Italian secretary Rizzio.

Sometime during her stay the secret pact known as the Craigmillar Bond was formed. The Bond was a plan to kill Mary's husband, Lord Darnley, but whether it was made with or without her knowledge is still a subject of debate among historians.

On the first floor you can visit 'Queen Mary's Room', a converted former kitchen, where the queen is said to have slept during her stay. Or did she? It seems much more likely that the queen stayed in a large apartment in the castle's east range, but records are unclear.

That isn't the only historical mystery at Craigmillar. In the early 19th century a secret compartment was found in the basement prison. There, walled up and forgotten, was an upright skeleton.

How did the unfortunate prisoner come to be walled up in the prison? Who is the skeleton? We simply don't know, but it certainly does hint at dark deeds and even darker secrets.

In the west range you can see the 17th-century apartments built for the Gilmour family. Outside the 15th-century courtyard wall stand more buildings, including a doocot and a private chapel, first recorded in 1523.

More self catering near Craigmillar Castle >>

This fabulous third-floor apartment is beautifully situated in the sought after Leith Shore backing onto the Water of Leith and is part of a unique late 18th Century converted cooperage. It has elevator access and …
Sleeps 2