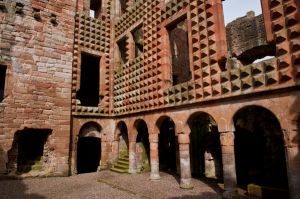 Despite the fact that Crichton Castle is only a short drive from the greater urban sprawl of Edinburgh, it stands in idyllic, secluded countryside, as if lost in time. One of the most appealing features of Crichton is the glorious setting on a hill above the winding River Tyne.
The first castle here dates to the 14th century, when John de Crichton built a striking three-storey high tower house, still visible as part of the east range of the current castle. A grim pit prison was carved out of the earth below the bottom storey.

John's son, William Crichton, rose to prominence as one of the most powerful statesmen of 15th century Scotland. In 1437 William Crichton became Chancellor, and he began to rebuild his father's tower house to reflect his new status. He constructed a new courtyard with a great hall and large kitchens, and founded a collegiate church nearby, paying priests to say prayers for the souls of himself and his family.

The Crichtons fell from power in 1484, and when James IV came to the throne in 1488 Crichton Castle passed to the newly powerful Hepburn family of Hailes, the Earls of Bothwell. James, the 4th Earl, was one of the most colourful and controversial characters in Scottish history. He invited Mary, Queen of Scots to Crichton Castle in 1562 for the wedding celebration of his sister Janet and Lord John Stewart, the queen's half-brother. Then in 1566 Bothwell married Lady Jean Gordon, sister of the Earl of Huntly. Lady Jean's sizeable dowry helped pay off the mortgage on Crichton Castle, whereupon Bothwell promptly divorced her. Twelve days after the divorce, and to great public dismay, he married Mary herself. It all ended rather badly for Mary and Bothwell

If James Hepburn added little to Crichton Castle, his heir Francis Stewart, the 5th Earl of Bothwell, certainly did. It is to Stewart that we owe the extraordinary Italianate interiors of Crichton.

Stewart travelled extensively throughout Europe, and when he returned to Scotland in 1581 he brought with him new ideas about what a fashionable home for a nobleman should look like. He began to transform medieval Crichton Castle into a Renaissance mansion, building a grand new residence on the north side of the courtyard. Stewart's new design created a hall on three levels, reached by straight stairs rather than the older spiral stairs of his predecessors. This was one of the first examples of this type of design to appear in Scotland. The most obvious result of Stewart's design is the extraordinary north wall of the inner courtyard, a symphony of diamond-faceted stonework unlike anything I've ever seen in Britain. Indeed, the courtyard of Crichton Castle looks like it could have come directly from Renaissance Italy.

The 5th Earl did not stop there; he built very grand stables a short distance from the castle, with huge, thick walls and a very grand window over the doors in the shape of a horseshoe.

Visiting Crichton
Although I had seen photos of Crichton Castle, I was totally unprepared for what met my eye on entering the courtyard. The Italianate design of the 5th Earl is absolutely stunning; so totally unexpected in a Scottish setting that it will take your breath away. The setting of the castle itself above the idyllic valley of the Tyne is absolutely stunning. Even the walk to the castle from Crichton church is appealing (good waterproof footwear is advisable if the weather is damp), and don't forget to visit the church if it is open. Even if it is closed you can still see the stonework of the collegiate church established by Chancellor Crichton. I can highly recommend a visit.

More self catering near Crichton Castle >>