HERITAGE HIGHLIGHTS:   One of the few surviving medieval mercat crosses in Scotland 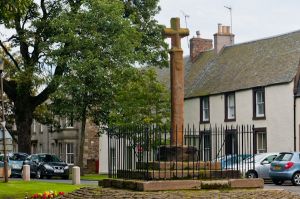 A 15th-century market cross in very good condition mounted on a modern base. The cross has a square shaft, with a Latin cross atop. The shaft is decorated with a heraldic shield, but the coat of arms on the shield is now too worn to decipher. It probably displayed the arms of the donor.

The cross may have been linked to a chapel which once stood across the course of the current High Street.

The chapel was destroyed when the 'new' village of Ormiston was built around 1735 by John Cockburn. Cockburn was a politician and one-time Lord of the Admiralty. He was also an agricultural reformer known as the 'father of Scottish husbandry'.

The cross was probably erected sometime around 1450. It is one of only a handful of surviving medieval mercat crosses in Scotland.

The Historic Scotland information panel suggests that it was originally used as a town cross. An account for 1792 records that it was already 'ancient' and set in the middle of the main street. There are still traces of staples in the cross which were used to chain malefactors as part of their punishment. The cross stands on a stepped base which is not original.