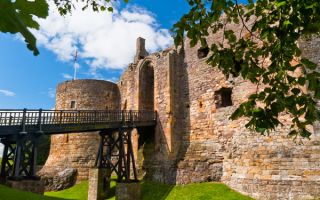 Visiting Dirleton Castle really gives you two historic attractions for the price of one. At the centre of the site is a fantastic medieval fortress, home to three powerful families. Set in the attractive grounds surrounding the castle is a much later garden, established after the castle had ceased to be occupied.
The story of Dirleton is the story of three families; the de Vauxs, who built the first castle here in the 13th century, the Haliburtons, who enlarged the earlier castle, and the Ruthvens, who established a comfortable - for the times - home within the castle.

The de Vauxs built the first wooden fortress at Dirleton sometime in the 12th century after transferring to Dirleton from their base on the Isle of Fidra, in the Firth of Forth. In the 13th century, this early fortress was rebuilt in stone, possibly by John de Vaux, steward to Queen Marie de Coucy, second wife of Alexander II.

The castle was captured by the English during the Scottish Wars of Independence. Robert the Bruce recaptured Dirleton and ordered it partially destroyed. Then the de Vaux line died out and in 1356 the title passed by marriage to the Haliburtons of Berwickshire. They rebuilt the castle and added the impressive east range.

The massive stone storage undercrofts built by the Haliburtons give us an idea of just how impressive Dirleton Castle must have been. They also added a very fine chapel with accommodation for a priest. Another, less pleasant relic of the Haliburton period is a pit prison, a grim and cheerless place where accused felons could be lodged until afforded trial at the whim of the lord.

Finally, the castle passed into the hands of the Ruthvens of Huntingtower in 1515. In the late 16th century the 4th Lord Ruthven transformed the castle with the addition of comfortable living quarters for the family. This accommodation area, called the Ruthven Lodging, had all the amenities of modern life, including glass windows and glazed floor tiles. The 4th Lord also laid out the gardens surrounding the castle.

In 1650 Oliver Cromwell besieged Dirleton as part of his efforts to defuse Royalist support in the Scottish Lowlands. Cromwell's troops destroyed the castle defences and rendered it unsuitable as a military fortress. Sir John Nisbett purchased the Dirleton estate in 1663, but rather than rebuild the castle the Nisbetts decided to build a comfortable new house at Archerfield. The castle was not totally abandoned, however, for the grounds were given over to use as a vegetable garden and a bowling green.

The Gardens at Dirleton
The first gardens were probably established within the courtyard and was likely little more than a patch of green with turf seats and potted plants for ornamentation. When William Ruthven married into the Haliburton family in 1515 he set about creating a garden to augment his fine new house. A later Ruthven, William, 1st Earl of Gowrie, created a more elaborate garden space, but it was not until the mid-19th century that Dirleton's gardens as we see them today really took shape.

In 1858 David Thompson was appointed head gardener for the Archerfield estate, and it was Thompson who helped transform Dirleton into a superlative example of a Victorian garden. The core of Dirleton's Victorian gardens were geometric patterns of beds with profuse colours of bedding plants. In the 20th century, this was transformed into an Arts and Crafts style garden with long, sweeping borders, known for their colourful plantings. How long? Well, according to the Guinness Book of Records, Dirleton possesses the longest herbaceous borders in the world!

Within the grounds is a beehive-shaped doocot with boxes for over 2000 pigeons. The doocot dates to the 16th century and was built by one of the Ruthven lords of Dirleton. There is also a small museum area in a Victorian garden gazebo.

Visiting Dirleton
There is a small parking area just beside the castle, across the wide village green from a historic inn. The combination of the inn, the large green, and the castle makes Dirleton a truly unforgettable sight. The castle grounds are enclosed by a long stone wall so that the gardens are hidden from immediate view.

When you enter the wall, however, the first thing that strikes you is the magnificent sea of colour from the long herbaceous borders. You wander up the garden, past the doocot, and around to the drawbridge entrance to the castle. That's when it really hits home just how imposing Dirleton really is; the castle looms over the dry moat, dwarfing visitors. It truly is an impressive building. Within the castle itself, I was most struck by the huge storage areas built by the Haliburton lords. Dirleton is easily the equal of many more famous castles and is well worth a visit to see.

More self catering near Dirleton Castle >>