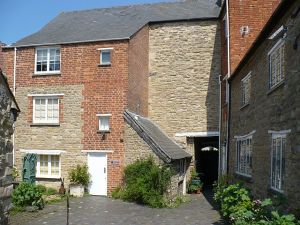 The rear of the Cowper & Newton Museum
This museum is housed in 'Orchard Side', the former home of 18th-century writer and poet William Cowper. Among Cowper's friends was Rev. John Newton, co-author of the hymn 'Amazing Grace' and an active anti-slavery campaigner. The museum contains exhibits illustrating the life and times of the two men.

The museum is housed in a Georgian red brick house on Olney's historic Market Place. Poet and writer William Cowper lived at Orchard Side from 1768-1786, and just a short distance away is the Olney vicarage, where Cowper's friend John Newton lived from 1764-1779.

Newton was born in Wapping, London, and had a long career as a sailor and slave trader. He was abandoned by his shipmates and was himself enslaved by an African duchess. He was rescued from his plight and during the voyage home to England experienced a conversion to evangelical Christianity. He turned against his former way of life - though he continued to work in the slave trade for several years before finally renouncing it.

He became a strident voice in the campaign to abolish the slave trade. He was ordained as an Anglican minister and served as a mentor to abolitionist William Wilberforce, and the museum traces Newton's role in eventually outlawing slavery in the British Empire. So popular was Newton during his 16 years as curate of Olney that an extra gallery had to be added to the church to accommodate all the local people who wanted to hear his sermons.

In 1788 Newton published 'Thoughts Upon the Slave Trade' in which he admitted 'I was once an active instrument in a business at which my heart now shudders'. Newton died in 1807 and was buried in London beside his wife, then reinterred in the churchyard at Olney in 1893. 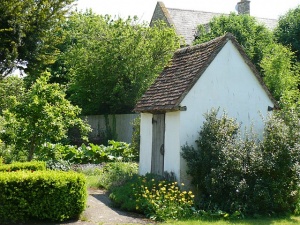 William Cowper was one of the most influential and widely read poets in English history. Part of his appeal is that he wrote of everyday life and scenes from the English countryside; a style that later gave rise to the Romantic movement popularised by William Wordsworth.

Cowper suffered from bouts of mental illness and was briefly put away as insane. He turned to evangelical Christianity for solace, and many of his most enduring poems are inspired by religious sentiment. His most famous phrase comes from the poem 'Light out of Darkness', where he wrote 'God moves in a mysterious way, His wonders to perform'.

In 1767 William Cowper moved to Olney and began to worship at Newton's church. In 1779 the 2 men collaborated on a book of hymns called Olney Hymns. Among the hymns in this influential volume were Glorious Things of Thee Are Spoken, and Faith's Review and Expectation. The latter song became more popularly known by its opening lyric, 'Amazing Grace'.

The museum holds a wealth of objects related to both Cowper and Newton, including first editions of Cowper's work, private letters and other personal objects.

Though most of the museum's focus is on the life and times of Cowper and Newton, there is more to see; there is a large collection of historical documents, old photos, and objects related to Olney's heritage. See artefacts from Olney's history as a centre for lace making, and manufacturing boots and shoes.

Behind the museum is an accurate restoration of the 18th-century gardens loved by William Cowper, who was a very keen gardener and kept up a correspondence with plant collectors. The garden uses only plants grown in England before 1800, the year of Cowper's death. Through a side gate is the Summer House Garden, which originally belonged to apothecary Thomas Aspray, who lived next door to Orchard Side.

When Aspray died, Cowper was allowed to use the herb and medicinal garden. Here he used a small summer house, or as he called it, a 'verse manufacturey', where he wrote many of his most famous poems. After Cowper's death, the summer house became something of a literary shrine, and you can see graffiti etched on the walls by 19th-century visitors. 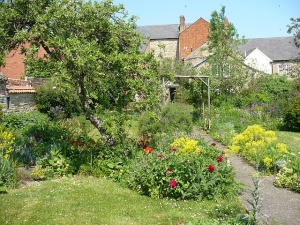 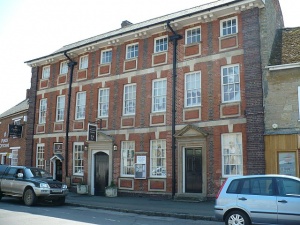 The front facade of Orchard Side house
(c) Robin Drayton

More self catering near Cowper and Newton Museum >>

More bed and breakfasts near Cowper and Newton Museum >>