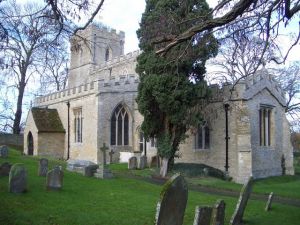 Clifton Reynes, St Mary's Church
A 12th-century church containing superb 14th-century wooden effigies. St Mary the Virgin at Clifton Reynes stands at the end of a long lane, seemingly isolated despite the fact that it is not far from the outskirts of Olney. The church consists of an aisled nave, chancel, north chapel, west tower, and a south porch.

The oldest part of St Mary's is the tower, which dates to the 12th century. The aisles are 13th century, and the chancel was rebuilt in the 14th century. Around 1360 the north chapel was built and the nave arcades rebuilt at the same time. The nave was heightened with the addition of a clerestory in the 15th century. The chancel, in particular, is a good example of 14th-century architecture.

Though the fabric of the church is interesting, the main historic interest at Clifton Reynes is the series of effigies to the Reynes family in the north chapel. It is quite unusual to find surviving medieval wooden effigies, but here we have not one, but two pairs of wooden effigies.

Both pairs of effigies date to the early 14th century and are crafted of oak. We cannot be certain who the effigies represent, but it seems likely that one is that of Sir Ralph and Lady Mabel Reynes. Sir Ralph held Clifton manor in 1303. The detail of the costume is quite wonderful and presents a vivid picture of 14th-century style.

On a table tomb is the second pair of wooden effigies, in a style of costume that suggests a date of the 1320s. This couple is thought to be Sir Thomas Reynes and his wife Joan. Again, the detail of carving is remarkable, and the tomb is replete with panels depicting heraldic designs.

Nearby is a much-worn stone memorial to a later Reyne, dated to the very late 14th century. This is possibly the tomb of the 3rd Thomas Reynes, who died before 1394. One nice touch on this tomb is the carving of a dog upon which the knight rests his feet. The dog wears a collar with the letters BO easily discernable. A favoured family pet, perhaps? Set into the floor is a brass which is probably that of John Reynes (c. 1498) and his wife.

There is more to see than just the Reynes effigies, however. The font is a lovely piece of octagonal craftsmanship. It dates to the late 14th century and has carved figures set within arched niches. The lower edge of the octagonal bowl is carved with foliage and a variety of heads. There are also fragments of 14th-century glass in the chancel and clerestory windows.