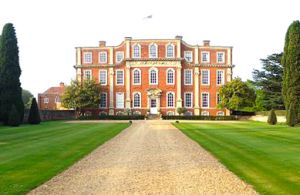 Chicheley Hall
An outstanding example of a Georgian manor house, Chicheley was built in the early 18th century by Sir John Chester. The ceiling of the great hall is especially outstanding; this was the work of William Kent and depicts Herse and her sisters sacrificing to Flora.
History
The first house at Chicheley dates back to the Middle Ages and was owned by the Pagnell family. The family granted the manor house to the church, and Cardinal Wolsey, Henry VIII's powerful head of state, gave it in turn to Christ Church College in Oxford.

After Wolsey's fall and the turmoil of the Reformation, the property reverted to the crown and was sold on to a merchant named Anthony Cave. Cave built a new Elizabethan manor house, but this, in turn, was damaged during the Civil War and had to be torn down. Only a few pieces of panelling and an overmantel survive from the Elizabethan Hall.

In 1719 Sir John Chester called in architect Francis Smith to design a fashionable new house in Baroque style, with a symmetrical facade decorated with Corinthian columns. The main entrance opens directly into Kent's Great Hall and from there staircases made of oak lead to the upper floors.

The most original feature on the upper floor is a secret library. The library chamber itself is not hidden, but all the books are concealed behind hinged panelling. The interiors are notable for their superbly carved woodwork and plasterwork ceilings.

The manor is surrounded by 100 acres of lawn and parkland, with 25 acres of gardens, and is notable for the unique canal on the east side of the house. The gardens were laid out by Henry Wise and George London, and include a long avenue of lime trees and an octagonal dovecote.

The house was used by the military during WWII, and after the war restored and frequently used as a setting for films and TV series. In 2007 it was purchased by the Royal Society and is now used as a venue for international conferences. It can also be rented for private and corporate events but is not generally open to the public.

More self catering near Chicheley Hall >>