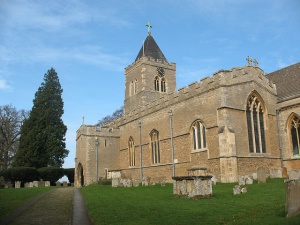 All Saints is a medieval church standing beside the local manor of Turvey House. The remains of an earlier Saxon church can be found in the stonework of the medieval building. Two late Saxon windows survive in the SW corner of the nave, and the unusual 4-corner font dates from about 1200.

The porch and tower are 13th century, though both have 15th century tops. In the interior, the south aisle contains a 14th-century wall painting portraying the Crucifixion.

However, the most prominent features of the interior are the 16th-century brass memorials to various Mordaunt family members. Several of the memorials are quite striking; the effigy of Sir John Mordaunt (d 1506) rests on a helmet topped with a shrieking man.

The elegantly simple memorial to the 3rd Baron Mordaunt (d. 1601) is composed of black alabaster and marble. The Baron was a reluctant judge at the trial of Mary, Queen of Scots.

The building was expanded to the east by prominent Victorian architect Sir George Gilbert Scott (also responsible for the Albert Memorial) in 1852. Scott's work gives the chancel a distinct mid-Victorian feel at odds with the earlier medieval work.

More self catering near Turvey

More bed and breakfasts near Turvey