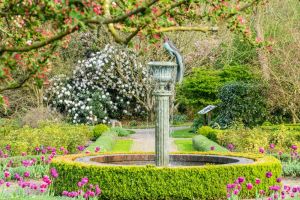 Borde Hill is an informal country garden, covering over 200 acres, with woodland and parkland areas as well as 17 acres of formal garden areas arranged as a series of distinct garden rooms, each with a different theme. There are enjoyable lakeside and woodland walks.
The garden is set around the historic Tudor manor of Borde Hill House, which was constructed in 1598. Borde Hill has been called one of England's finest gardens, and is one of the '5 Great Gardens of Sussex'. The park and woodland are Grade II listed, and there are fabulous views from the garden across the Sussex High Weald.

Some of the most interesting garden areas include the Garden of Allah, a quiet area planted with magnolias, camellias, and champion trees. Then there is the Italian Garden, centred around a pool looking out over the sloping hillside. The Round Dell is a space for sub-tropical plants, and the Rose Garden is planted with 500 English roses from David Austin. The Rose Garden is beside a set of Victorian greenhouses, and leads to a small Mediterranean garden and a White Garden in front of the manor house.

The house was built in 1598 by Stephen Borde, though the estate itself goes back to at least 1534. Borde's crest appears over the west porch. A later crest on the gate to the rose garden is that of the Preston family, who bought the house in 1825 and added the central block. 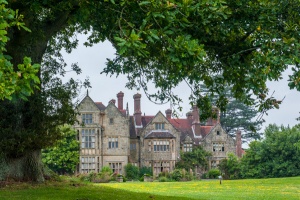 The Tudor house at Borde Hill
The garden was laid out in the early 20th century, with plants brought back by plant collectors from across the globe, including species from the Himalayas, the Andes, and Tasmania. Borde Hill has the largest private collection of champion trees in Britain, and one of the largest collections of shrubs and trees anywhere in the world. It is no wonder that Borde Hill is a past winner of the prestigious HHA / Christies Garden of the Year Award (2004).

Visiting
We came late on a rather dull summer day, when we were practically the only visitors; it was as if it was our own private garden. The way the formal gardens are arranged as a series of small 'rooms' helps create a sense of mystery, and surprise as you enter a new room and find something different. There are wonderful statues scattered around the gardens at strategic points to act as eye-catching focal points. Some of these sculptures are quite compelling, like a fiercely fanciful dragon, and a young woman playing a flute, water droplets glistening off the underside of the flute's body.

The 16th century house acts as a backdrop throughout much of the garden, creating a wonderful sense of history and timelessness. I half-expected to see a lord and lady ride out, followed by a retinue of brightly clad servants!

Borde Hill is a delight, a wonderful visiting experience, whether you come purely for the garden or to experience the setting beside the historic manor house. 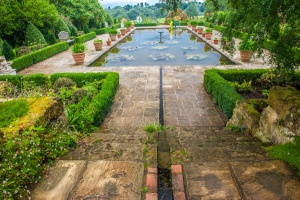 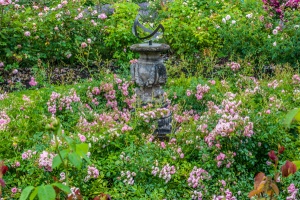 A sundial surrounded by summer flowers 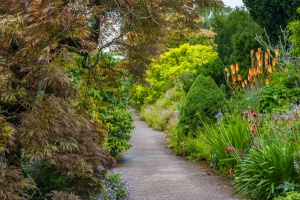