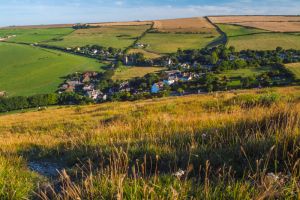 Lulworth is one of the most photographed locations on the south coast of England. The village is classic Dorset, with thatched cottages and pretty traditional inns. The harbour is a horseshoe shaped natural harbour known as Lulworth Cove.

Lulworth is home to a unique population of 'Lulworth' butterflies, and a short walk from the harbour brings you to the remains of a petrified forest by the shore.

Across a narrow neck of land from the harbour is the natural sea arch of Durdle Door. Beside the sea arch is a shingle beach, reached by a steep set of steps down the cliff or over the hill from Lulworth Cove. Durdle Door is a natural limestone formation created by the action of waves over thousands of years. The name Durdle Door comes from the Old English 'thirl', to pierce or drill, and the modern word 'door' for an opening, or doorway.

By the Cove is a small heritage centre where you can learn more about the geology and history of this unique area of the Jurassic Coast. There is an exhibition on the history of the weld family and the Lulworth Estate, and displays on fossils and the history of sailing and smuggling along this stretch of coast. The Heritage Centre is open all year and is free to enter.

The Lulworth area is famed as the home of the Lulworth Skipper butterfly, coloured orange-brown, with a wing-span roughly 25-27mm. It is among the smallest native British butterflies and was first noted in 1832. The Skipper can be found in large numbers along the south Dorset coast.

East along the shore from Lulworth Cove stand the remains of an ancient petrified forest, set on a wide ledge above the waves. The petrified forest was formed at the end of the Jurassic period, about 140 million years ago. The tree remains appear similar to modern cypress trees, with foliage like a monkey puzzle tree. The trees are quite remarkable to view up close, with large ring-shaped remains up to 2 metres wide in places. The location is part of the Lulworth Ranges, a restricted military area, so access may be limited - watch for red flags on the trail!

If you continue along the coastal path past the Petrified Forest you come to Mupe Bay, where long, jagged fingers of rocks jut out into the ocean. This ruggedly beautiful area is much less-visited than Lulworth Cove itself, but is a staggeringly beautiful and secluded place, especially in the early morning or late evening, when golden sunlight picks out the jagged teeth of the rocks.

Further afield is the home of the Weld family, owners of Lulworth Estate. The castle was begun in 1588, possibly to a design by Inigo Jones. It was purchased in 1641 by Humphrey Weld, and the weld family still own it today. The French Royal family stayed at Lulworth after the French Revolution. The house was gutted by fire in 1929, and restored to serve as a tourist attraction and event venue. 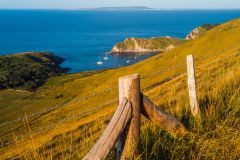 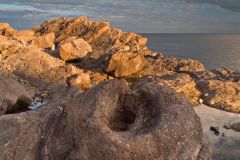 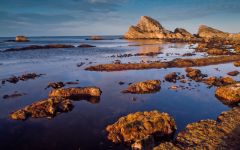 More self catering near Lulworth >>

More bed and breakfasts near Lulworth >> 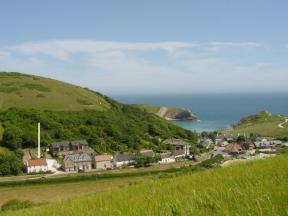 This property is located in the village of West Lulworth a pretty coastal village the main road of which leads down to the horseshoe shaped beach at Lulworth Cove. The …
Sleeps 6