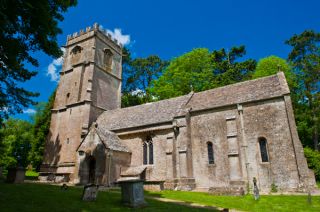 Elkstone
Elkstone is a small village near Cheltenham, set on a high hill (indeed, the parish church is the highest above sea level in the county). The most interesting historic attraction in the village is that same Norman church, which boasts an unusual dovecote over the chancel. There is also a beautifully carved Norman tympanum over the south entrance.
The village was already in existence at the time of the Domesday Book of 1086 when it was called Elchestane and had a total population of 19. The lords of the manor were the de Cormeilles, but by the early 14th century, the manor was held by John of Acton. We know this because John became involved with a revolt against Edward II and his estates were confiscated by the crown. By the middle of the 14th century the Poyntz family owned the manor, and they retained it until 1539. The manor passed through the Huntleys to the Craven family.

Elkstone must have been a quiet place until the discovery of mineral waters at Cheltenham. Cheltenham became a popular spa town, and regular coach traffic began between Gloucester and London, passing through the village. Among famous names to visit during this period was Jane Austen, who visited the rectory on several occasions.

The village name is a matter of some debate; it might derive from a Saxon named Ealac. The 'stone' may be a form of the Saxon word for 'home' or 'dwelling' so Elkstone might mean Ealac's Home. An alternative version suggests that the 'stone' refers to the pagan carved stone now found in the church vestry.

Near the church is Elkstone Manor, built in 1873. There is also an old school building that now serves as the village hall. There are three pubs in and around the village. The Green Dragon is a 17th-century inn with the bars and furniture made by the famous 'Mouseman' Thompson of Yorkshire. The Highwayman Inn dates to the 17th century also, though the original buildings were erected in the 16th century. The Inn is located at a crossing on the old 17th-century turnpike road. A bit further afield is the Colesbourne Inn, another coaching inn, dating to 1827, standing midway between Cirencester and Cheltenham.

More self catering near Elkstone >>

More bed and breakfasts near Elkstone >>