HERITAGE HIGHLIGHTS:   Based around an historic 18th century mansion house 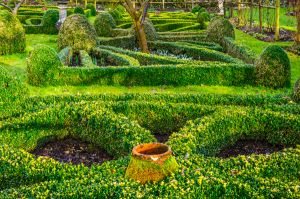 Very much a family enterprise, Cerney combines the best of the formal aspects of the traditional country house garden with a gloriously organic approach. See a working kitchen garden and orchard, culinary and medicinal herb garden, wildflower bank, 40 acres of woodlands and parkland, all set around a Victorian walled garden with a 19th-century conservatory.

Cerney House was built in 1660 by the Rich family, who occupied the property until 1772. The house was purchased by Thomas Tynedale of Stroud, though he did not live there but chose to rent it out. In 1780 the house was remodelled in a fashionable Georgian style by James Burton, possibly after a fire had damaged the earlier building.

In 1810 the house passed to the Croome family, who retained it until 1930. Generations of Croomes are commemorated at nearby North Cerney church, as the Lady Chapel served as a private family chapel. The house served as a hospital in WWII and was purchased by Sir Michael and Lady Angus in 1983. Since then the historic gardens have been lovingly restored and extended to create the gardens we see today.

The centre of the garden space is a Victorian walled garden. There is a working kitchen garden, a herb garden, woodland, and a wildflower bank. 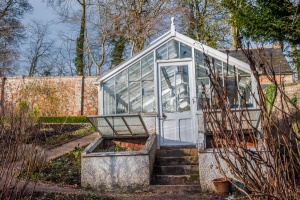 The 3.5-acre walled garden is divided into several main sections. A pair of wrought iron gates in an acorn design wide grass paths and herbaceous borders leading to a Victorian gazebo. One of the most popular areas is the Knot Garden, with old roses trailing on a trellis and a laburnum arch leading to a scented garden. Four quince trees are also part of the Knot Garden area.

The main borders at Cerney House are themed in yellow colour in the centre, with gravelled paths lined by hyssop and lavender leading to the walls where old roses and climbing plants thrive. Further afield is the woodland, planted mostly with beech, where carpets of aconites, wood anemones and snowdrops flourish in season.

There is a tree list if you'd like help identifying all the different species. Other areas of interest include a rock garden and a Victorian conservatory.

The herb garden is divided into two parts; a culinary section with plants grown for use in teas and infusions, and a medicinal garden based on Culpepper's Herbal.

The garden is open year-round and is well worth visiting in spring for its display of snowdrops, followed by bluebells and daffodils. In summer the garden is lush with colour, and in autumn the trees in the surrounding parkland are a riot of reds and golds. 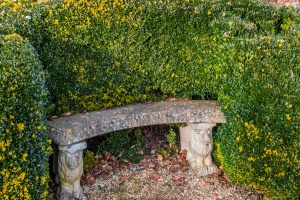 We visited Cerney House gardens on a sunny day in February. The first part of the experience is finding the house; it is not in North Cerney village, which is laid out to the east of the A435, but to the west, uphill from the church.

There is a well-signed parking area above the house, and signs directing visitors on a suggested circular route around the garden. At the entrance is a simple honesty box, and from there the path leads through lovely beech woodland, where patches of snowdrops bloom beside the path and tucked up next to a stone wall to one side.

You get glimpses of the main walled garden through the trees, but the trail leads in a complete loop through the snowdrop woods and back to the mansion house. You actually pass directly in front of the house entrance before taking another path beside the house and climbing a set of steps to a trellised walk with climbing roses. This leads in turn to the walled garden itself, with a Victorian conservatory to one side, where you can pause for a hot drink and a snack from the cafe.

On the upper side of the walled garden are lovely espaliered fruit trees. The walk leads to a set of wrought-iron gates giving access to the gazebo garden. The most interesting garden feature, and the one that will catch most people's eye on entering, is the wonderfully intricate Knot Garden, with a carefully arranged sundial acting as a focal point. The Knot Garden is a delight, a formal garden area softened by carefully planted flowers in amongst the hedges.

One feature worth mentioning is the wonderful array of sculpture around the garden. Some pieces are traditional stone sculptures, some are whimsical, and some are simply eccentric, like metal chickens scratching amid the plants, or a pair of hares fighting. The sculptures ensure that no matter where you look, there is always something catching your eye, always something interesting, begging you to look closer.

Our family loved visited Cerney House Gardens, and I've already vowed to go back again and see it in a different season! 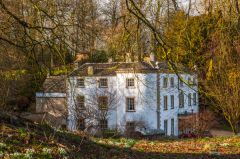 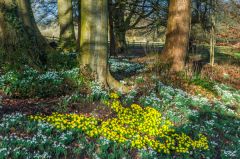 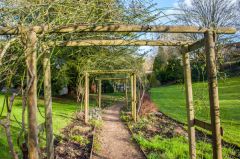 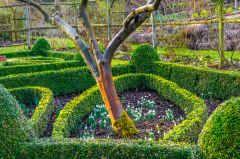 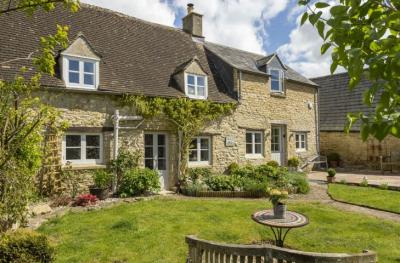 Mole End Cottage is a beautiful 18th century cottage which has been refurbished to a superb standard. Situated in North Cerney and just 7 miles from Cirencester, on the doorstep …
Sleeps 4