HERITAGE HIGHLIGHTS:   Panelling from the lost Tudor palace of Nonsuch 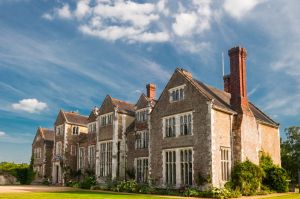 Loseley Park
This wonderfully atmospheric Elizabethan Manor House has been the home of the More-Molyneux family for over 400 years and was built by an ancestor of the present owner. The richly furnished interiors feature fine portraits and works of art, furniture from the 16th century and panelling from Henry VIII's Nonsuch Palace.

There was a medieval manor at Loseley, but the house we see today was built by Sir William More, an Elizabethan courtier and statesman. In 1562 More extended his home in anticipation of a state visit by Elizabeth I. It was 8 years before the queen and her retinue descended upon Sir William's creation. In 1689 a descendant of Sir William married into the Molyneux family and the More-Molyneux's have owned Loseley ever since.

From the outside Loseley looks like a typical E-plan Elizabethan house, symmetrical, and built of white stone. The focal point of the ground floor is the magnificent Great Hall, illuminated by a wide bay window. The dark wood panelling in the hall is carved with the symbols of Henry VIII and Katherine Parr, and is thought to have come from Nonsuch Palace.

Perhaps an even greater prize is a set of painted canvas panels from Henry's banqueting tent. One of the most striking portraits in the hall is that of Cassandra More-Molyneux, her husband, and children, carefully posed in the centre of this self-same Great Hall. Gazing at the portrait is like looking into a mirror and seeing back in time.

Another descendant of Sir William was his granddaughter, Ann, who defied her parent's objections and married poet John Donne in secret. When the marriage was revealed, her father, Sir George More, had his new son-in-law thrown into Fleet Prison. Eventually Sir George was prevailed upon to relent, and Donne was released. He and Ann had 12 children together before she died in childbirth, and some of Donne's greatest poems were inspired by his love for his wife. 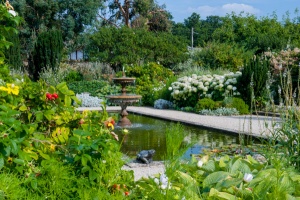 Also on the ground floor is the Library, another richly panelled room, with a panel over the fireplace commemorating the visit of Queen Elizabeth.

But it is the drawing-room that will draw gasps of admiration from visitors; this exquisitely decorated chamber is thought to have been made in anticipation of another state visit, this time from Elizabeth's successor, James I and VI. James visited Loseley twice and presented the family with portraits of himself as a gesture of gratitude for their hospitality.

The ceiling is a riot of pendants and strapwork detail, but the fireplace is even more elaborate; carved from a single piece of chalk, with monsters and caryatids framing a classical design with scrollwork detail.

From the drawing room you mount a wonderfully decorated wooden staircase to a set of linked bedchambers, with fine panelling and ribbed ceiling decoration. Two of the bedchambers are hung with very attractive Oudenarde tapestries.

The house stands in a level parkland, with views in all directions. Part of the park is set aside for the Loseley dairy herd, for Loseley is famed for its dairy products. If you have children (or simply a sweet tooth) you've probably heard of Loseley ice cream!

To the west of the house is a modern chapel and tithe barn for hosting gatherings, while trails lead from the house across the park. To the east of the house stands a walled garden, an oasis of greenery and vibrant colours.

One side of the garden runs along the remains of the medieval moat that surrounded the earlier house at Loseley. At one end is a white garden, based around a small canal and fountain, while the rest of the garden is divided up into distinct areas, or garden rooms. This is an absolutely lovely place to stroll about, with a wide variety of colourful plants.

We loved visiting the house; admission was by guided tour only (and they did not welcome photography, so I can't share any views of the Elizabethan rooms). The guide was informative and the tour very enjoyable indeed. The house interior is a delight, a rich tapestry of darkened wood and carved panels, Tudor memorabilia and ornate decoration, full of historic interest and period furniture. 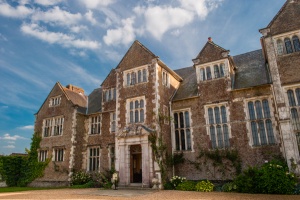 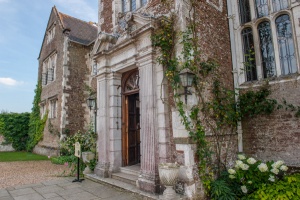 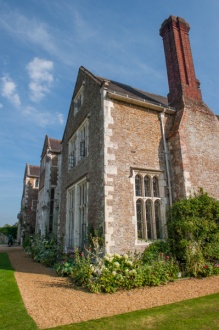 The west side of the house
THE WALLED GARDEN 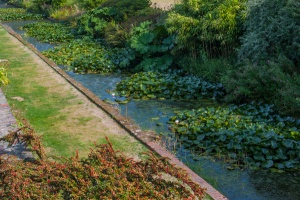 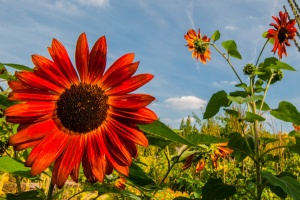 Summer sunflowers in the garden 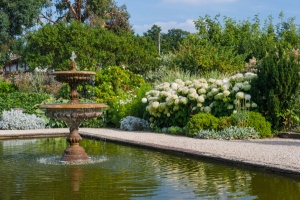 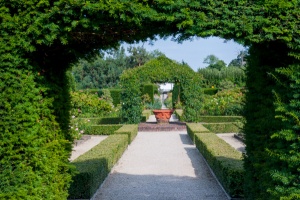 Entrance to the walled garden 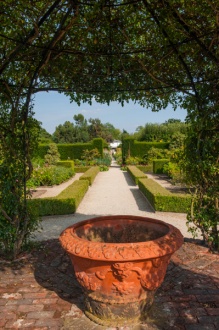 More self catering near Loseley Park >>