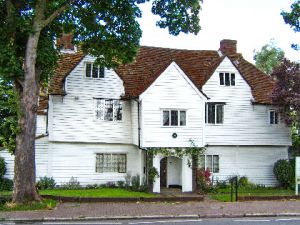 Whitehall Tudor House Museum
An unpretentious white house dating to the Tudor period. See the 16th-century fireplace and bread ovens, the Stuart 'Graffiti' door, Georgian wallpaper, and Victorian rooms with displays about the Killick family, who inhabited Whitehall for over 200 years.

Whitehall is a simple weather-boarded house, built around 1500 in the centre of Cheam by a yeoman farmer. It was part of the East Cheam Manor Estate until 1785. There had been an earlier medieval house on the site, served by a 15th century well which has been discovered in the rear garden at Whitehall. The house itself is two storeys, with a projecting central jetty, and a wide overhang front and back.

The house was built of local oak and elm, used within a few months of felling, so there has been an inevitable twisting of beams and settling of the structure over time. The entire structure was laid out by carpenters, pre-assembled, and marked with matching mortise and tenon Latin numerals before being disassembled and transported to the building site.

Once on site, the building was reassembled like a piece of modern flat-pack furniture, fitting the already numbered pieces together.

The roof is a crown-post deign, and was possibly thatched at first, though this was later replaced with hand-made tiles.

The house is lit with wooden mullioned windows. These were originally unglazed, and protected by shutters. Unlike many large timber houses at that time there was no central hearth, so the house must have been heated with a hearth or chimney at one or both ends. Later in the 16th century, a chimney was inserted in the north end.

In the 17th century, a three-storey extension with a cellar was erected behind the house. This extension was probably built at the time when Reverend George Aldrich, who founded the Cheam School, resided here.

The strong links between the school and Whitehall continued in the 18th and 19th centuries when school pupils and staff frequently boarded at the house. From 1741 the house was leased by the Killick family, who added white weatherboarding to protect the old timber structure.

You might reasonably assume that it was at this stage that the house gained its 'Whitehall' name, but actually, the name seems to predate the addition of white weatherboards. One theory is that the name comes from the Wight family, who owned property in Cheam during the 14th and 15th century. Was Whitehall really 'Wight's Hall'?

The house has been known by several other names, including Maids of Honour House, which might suggest a connection to the nearby Tudor palace of Nonsuch. Another local name was Council House, which may connect the building to an unsubstantiated story that Elizabeth I held a council meeting here during a hunting expedition.

In 1963 the house was sold to the Borough of Sutton and Cheam and is now operated by the Friends of Whitehall as a museum. Visitors can see the parlour, kitchens, and a dressing room used by local teacher Harriet Killick, along with displays on the long connection of the Killick family with the house.

One of the most interesting interior features is the Graffiti Door, carved with Catholic and Royalist symbols from around the time of the English Civil War.

You can ascend to the attic, added to Whitehall around 1600. Large sections of the ceiling plaster have been removed to expose the crown post roof construction. Interestingly, the crown-post construction method went out of fashion around 1550 because it did not work well with the new fashion for attics.

One of the attic rooms is furnished as a schoolmaster's study, recalling the period in the late 19th century when three masters from Cheam School lodged here. Another room is set aside to tell the story of Nonsuch Palace, once a glittering jewel in the Tudor crown, but later forgotten and pulled down.

Whitehall is a delightful Tudor house, full of architectural interest and a reminder of a bygone age of Cheam heritage.