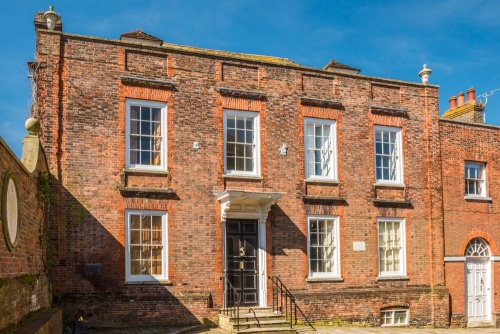 Lamb House is an attractive 18th-century brick house that was once the home of writer Henry James and also of author EF Benson. There are mementoes from James' life and works on display. The house is surrounded by a pretty, though small, walled garden.

Lamb House takes its name from the first occupiers of the property, the Lamb family. It dates to the Georgian period and is built of red brick, tucked away on a bend in a quiet cobbled street behind the parish church and just around the corner from picturesque Mermaid Street.

In 1726 a ship carrying George I was forced to run ashore at Camber due to a storm. Lamb House was considered the only residence in Rye suitable for a king, so James Lamb offered his own bed to the monarch. The bedroom where George resided for several days is now known as the King's Room. The house remained in the Lamb family until 1832 when it was sold to a rich banker. 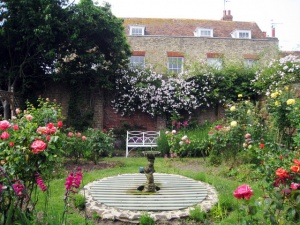 Over the ensuing centuries the house has had several literary associations, most notably with American-born writer Henry James. James, author of The Turn of the Screw and Daisy Miller, among other works, first came to Rye to visit a friend. He stumbled upon Lamb House by chance and was smitten. The chance to lease the property came in 1897, and in 1899 he purchased the property outright.

James wrote three novels while living at Lamb House, including The Wings of the Dove, The Ambassadors, and The Golden Bowl. He also featured the house in his novel The Awkward Age, where it appears as the home of Mr Longdon. He liked to write in a small Georgian banqueting hall beside the main house, called the Garden Room. The Garden Room no longer exists, being hit by a bomb during WWII. A plaque on the exterior wall of the garden marks the location of the Garden Room.

During James's residence, Lamb House became the centre of a literary circle, and famous guests included HG Wells, Rudyard Kipling, GK Chesterton, and Hilaire Belloc. James so loved the house that when he fell mortally ill in London in 1916 he asked to be taken to Rye. Unfortunately, he was too weak to be moved.

Today the house is preserved as it might have appeared during James's lifetime, with personal mementoes, photographs, and furnishings.

Behind the house is the garden that James loved. The garden as we see it today was laid out by Alfred Parsons, a friend of James. There are colourful herbaceous borders, climbing vines, and a small pond, creating a quiet and attractive refuge at any time of year.

Lamb House is cared for by the National Trust and, as of this writing, is open seasonally.

Image of the Lamb House gardens is (c) Oast House Archives, republished with gratitude under a Creative Commons license 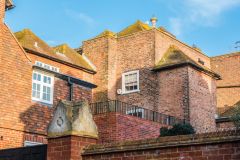 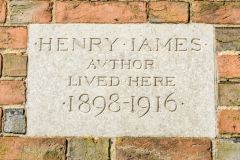 More self catering near Lamb House >>

This wing of the owner's home is situated two miles from Rye and sleeps six people in two bedrooms.
Sleeps 6 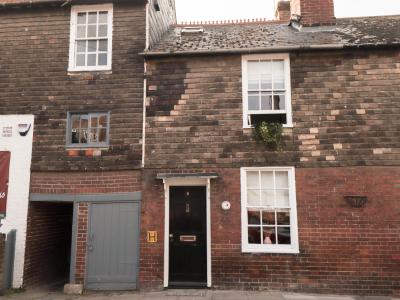