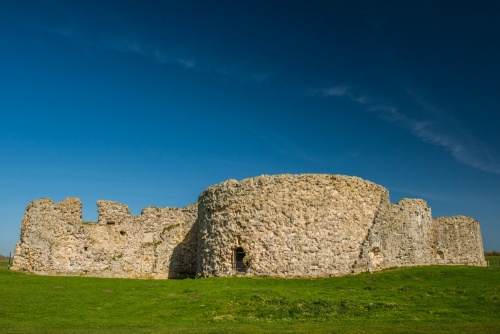 Camber Castle is one of a series of forts built by Henry VIII along the south coast to counter the threat of a French invasion during the 1530s. The sea originally lapped at the foot of the castle, but silting over the centuries means that Camber now stands alone in a low-lying field over a mile from the shore.

The castle is fairly typical of Henry's fortresses; a geometric design with rounded bastions arranged around a central tower. The tower was built first, around 1512 as part of a plan to defend Rye harbour. The rounded design of the circular tower was intended to deflect cannonballs. The builder was Sir Edward Guildeford, who chose a location at the end of a long shingle spit, just a few metres from the sea.

The castle was essentially unaltered for over 25 years, but a treaty between Spain and France in 1538 put England under threat of an attack by sea. That prompted Henry VIII to begin an ambitious programme of strengthening England's coastal defences. Part of that programme involved expanding and strengthening Camber Castle.

In 1539 King Henry had the outer curtain wall built around the tower, which was raised in height. Gun platforms were built at alternate corners and a passage was constructed inside the curtain wall, linking the gun platforms.

There was originally only a single bastion near the entrance, but around 1542 the castle was altered to a geometric design similar to Deal and Walmer. The gun platforms were then replaced with four larger bastions fitted out with their own gun ports. 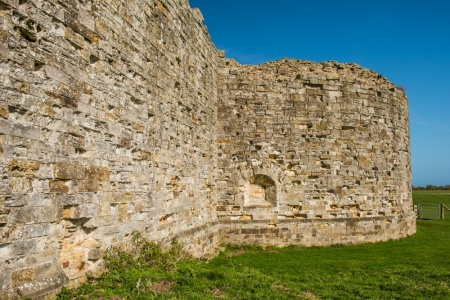 The new bastions meant the original ports in the central tower were not needed, so the tower was doubled in height. Between the four bastions are stirrup towers, smaller two-storey D-shaped towers so-named because their shape resembled a horse stirrup.

The bastions and stirrup towers were linked by a mural passage running the entire circumference of the fortifications.

In the 1580s the Rye Fellowship of Fishermen were granted the right to maintain a beacon at Camber Camber to aid boats navigating the Rye harbour approaches.

The effects of the retreating sea meant that Camber Castle was rendered essentially useless within a century. As the sea receded the cannons at the base of the bastions were too low to reach approaching ships, so they were raised to roof level. Unfortunately, the bastion roofs proved too weak for the heavy cannons.

In 1626 Charles I ordered the castle destroyed, but for some reason, the order was never carried out. The guns were removed and taken to Rye, and for a time the crumbling castle was used as a source of building stone by local residents. 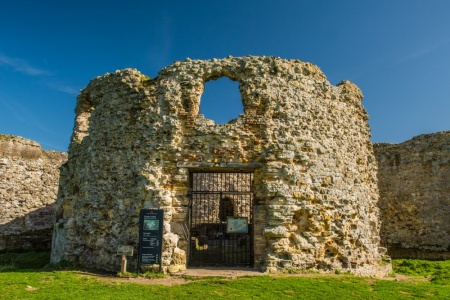 For almost 300 years Camber Castle sat idle, a picturesque ruin, until in 1943 it was fortified as an anti-aircraft gun base. It was restored after the war and incorporated into Rye Harbour Nature Reserve, with footpaths linking it to Rye Harbour and Rye itself.

If you look at aerial photographs of Camber Castle it is hard not to be struck how much it resembles at Tudor rose. It may be an accident, or a case of Henry VIII's sizeable ego at work, or simply a happy coincidence that the five-petalled curtain wall surrounding a circular central keep so closely resembles the Tudor emblem and also creates a good defensive structure at the same time.

Entrance is through a gatehouse in the northwest bastion. The gatehouse dates to 1542 and had quarters for the garrison captain, including a private garderobe, a hall, porter's lodge, and dining room. It originally had two floors, linked by an internal stair, as well as a basement room. The basement, however, kept flooding and was abandoned after just 3 years. You can still see the steps that led down into the chamber below ground.

The central keep is 65 feet across and boasts 11 ft thick walls. It was originally about half the present height, and boasted 10 gun ports. When Henry VIII strengthened the castle the ground floor was lowered to create a basement, and the roof was raised to create three floors. You can still see the castle well in the floor of the basement chamber. There is another well in the castle courtyard.

The west bastion was used as a kitchen, and you can still see a large fireplace and double chimneys, as well as a pair of bread ovens built into the fireplace.

Some artefacts unearthed at Camber Castle are on display at Rye Castle Museum (Ypres Tower). Excavations unearthed large numbers of animal bones, and historians have been able to use these bones to get an idea of what the garrison ate as part of their normal diet. It appears that their most common food was sheep, followed by cattle and rabbit. 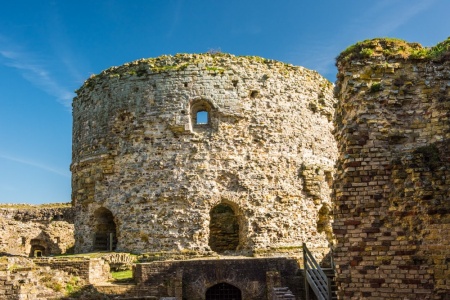 You really do have to want to get to Camber Castle. Think of it as a walk through a lovely nature reserve, with a castle in the middle. English Heritage sponsors monthly guided tours of Rye Harbour Nature Reserve with special castle admission during the tour, but otherwise you'll have to be content with viewing the exterior of the castle.

To be fair, you can actually get a pretty good view of the interior through the iron grill that bars the entrance.

The trail that goes past the castle leaves the A259 about a mile south of Rye, off Harbour Road. Park on Harbour Road or simply walk down from the town centre. It's about a 1 mile walk each way, but the going is very flat, so it should take no more than 20 minutes each way.

You can easily make the excursion into a longer circular walk - that's what we did; we parked our car at the public car park in Rye Harbour and followed the trail along Nook Beach. You can see the castle in the distance as the ground is so flat, so there's not much hope of getting lost. The trail joins the Royal Military Canal Path and goes straight past the castle gates. An OS map is very useful, though. The one we use is the Explorer 125. 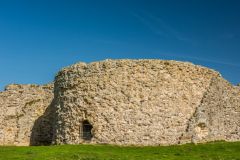 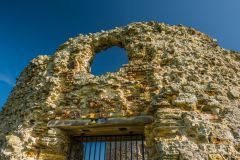 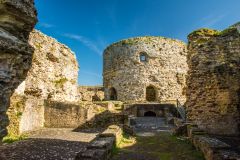 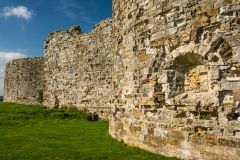 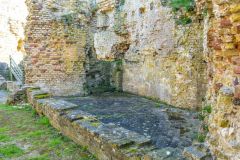 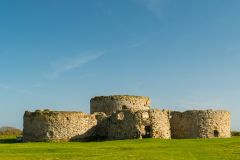 More self catering near Camber Castle

Self Catering near Rye